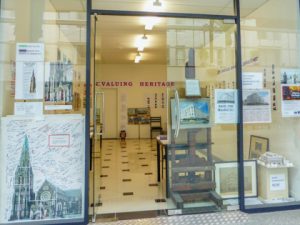 the text from the awards

Thousands of visitors from around the world and New Zealand, as well as locals, have visited Shop 7 over the nearly two years it was open in central Christchurch. A sample page from the visitors’ book records messages from visitors from England, Australia, Germany and Holland. People were heartened by the restoration stories, but the great majority were deeply saddened by the loss of heritage in the city. The legacy of Shop 7 is a better informed public locally, nationally and internationally about the crisis faced by heritage destruction post the earthquakes."
http://www.heritageawards.co.nz/award-category/heritage-tourism/?awards-year=2016

Concerned citizens and Canterbury heritage groups including Historic Places Canterbury, IConIC and Civic Trust are appalled at the news that CERA has issued an s38 demolition order on the Christchurch Technical College (now CPIT) Memorial Hall at the request of CPIT.

This imposing building was opened in 1935 as a specially designed memorial to the supreme sacrifice made by 71 former pupils of the Technical College who were killed in World War 1. END_OF_DOCUMENT_TOKEN_TO_BE_REPLACED