You should have received a copy via email by now!

Leaving Ashburton at 9.30am from outside Ashburton District Council building.

First stop Geraldine:Here you will have time to browse the town centre, its col-lection of unique and interesting shops and/or relax in one of the many cafés, perhaps sample a tasty morsel or two

Speaker and Tour—David McBride, an eloquent and knowledgeable local Ar-chitect and chairman of the Timaru Civic Trust will talk about the history of the Landing Service Building, the campaign to save it from certain demolition and its restoration which has turned it into a real commercial success story. David will then take us on a guided walking tour around the town centre, where we will visit many of Timaru’s architectural gems.

Miaflora—Winchester— We will stop at Miaflora Garden Centre and Café on our way home. Here you can indulge the wonderful garden and art, wander the garden centre or have a coffee in captivating sur-roundings!

Back in Ashburton around 5pm

(Membership per annum is $30 individual, $45 family. Member-ship supports our projects and advocacy work. It may be added to bus trip payment if you wish to become a supporter.)

Join us for a House Tour, Garden Tour and delightful afternoon tea!

This is for members only, although you are welcome to bring along a friend.

Need a ride?  No worries, just let Marian or Julie know and one of our committee will be delighted to transport you.

Payment can be made directly to our account -email Julie and she'll give you the bank account number.

or posted to HPMC, C/- 21 Philip Street, Ashburton, or collected on the day.

We do need to know numbers for our catering.  Hope to see you there.

The Blue Heritage Plaques project is a new initiative from Historic Places Mid Canterbury to identify and promote our local built heritage, through the use of a distinctive and bold blue cast aluminium plaque fixed to the facades of our more significant historic buildings.

As well as giving a short history of the building, informing locals and visitors about its particular historical significance, the Blue Plaques aim to increase the prominence of our historic buildings, encouraging increased awareness of our local history and supporting the retention of our existing heritage assets. They also assist in reinforcing the importance and value of these buildings to the local community and help foster a desire to protect and maintain our unique local history and identity.

The success of the project within the Ashburton District has encouraged the group to start promoting the scheme further afield, through local HPA member organisations, with aspirations of eventually taking the programme nationwide, creating an instantly recognisable symbol which proudly identifies our nation’s valued built heritage. 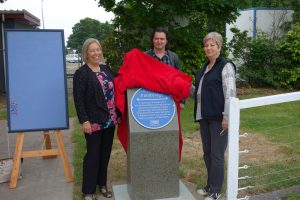 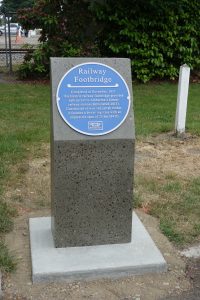 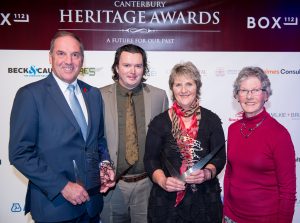 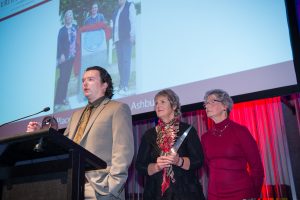 Join us for a fun day out visiting these fantastic places:

Trinity Church/ Shand’s Emporium — For those of you who joined our 2015 tour this will be a much anticipated update. Heritage champion Dr Anna Crighton is chairperson of the Trust that owns the Trinity Church. Anna is available to talk and update us on the progress made on this building. Right next door is Shand’s Emporium, another restoration we will be able to view and hear its restoration story.

The Tannery — Shop, eat, enjoy—The Tannery is a boutique shopping centre on the banks of the Heathcote River in Woolston, Christchurch. This old industrial precinct from the 19th century is now home to a retail complex boasting stunning architecture and art, and home to a concentration of boutique shops; a hub of creativity and hospitality, retail, craft and entertainment. You will be able to purchase lunch here, or you may wish to bring some with you.

Ohinetahi - Sir Miles Warren’s Garden—Governors Bay –includes a guided tour, talk and afternoon tea.
Ohinetahi is in a small bay with fine views down the length of Lyttleton Harbour and up to the surrounding hills.
A garden was first made on this site in 1865 by T.H.Potts, New Zealand's first botanist. Potts planted a great variety of exotic trees and shrubs, many of which still stand on the perimeter of the garden. He died in 1888 and thereafter the garden fell into disrepair until it consisted of little more than a lawn around the house.

Sir Miles Warren and Mr and Mrs Trengrove restored the house and began the present garden in 1977. Designed by two architects and an artist, the garden inevitably has a strong frame. The formal garden consists of a number of separate garden rooms of differing style and character arranged about two axis, one running east west and another north south.
On the side of the house there is a formal lawn with curved macrocarpa hedges at the end balanced by a pool and pool house at the opposite end. There is a rose garden enclosed in box hedges, traditional double herbaceous borders leading to a gazebo, a square walled garden planted in colours of red and green, and a walk of pleached hornbeams on stilts leading up to an oval lawn encircled with a hornbeam hedge.

Beyond the poolhouse a potager garden is arranged about a large marble capital and a glasshouse. From the oval and the gazebo, steps lead down to a woodland garden shaded by Pott's original trees with a stream flowing down to the harbour. A swing bridge extends the cross axis to a bush walk.
The garden is accented by architectural fragments and modern sculpture.

Timetable:
9.15am Leaving from outside the Ashburton District Council Building/Courthouse. There is plenty of angle parking.
10.00am Morning refreshments and toilet stop at Rolleston.
10.45am Trinity Church/Shand’s Emporium tour
12 noon The Tannery
2pm Ohinetahi Gardens and afternoon tea
Around 4pm we will depart for Ashburton.

Historic Places Mid Canterbury were announced winners of the Outstanding Contribution to Heritage category at the Canterbury Heritage Awards 2018.

The citation from the Awards website is the following:

Historic Places Mid-Canterbury generates community awareness, appreciation and retention of historic buildings and sites that have social and heritage value for the Mid Canterbury community.  They have successfully manned regular displays, heritage bus trips, Living Heritage articles in local newspapers, a yearly summer Garden Party in historic surrounds and regular newsletters.  They have now recently introduced the Blue Plaque Project.  This is gaining approval and interest from other heritage groups and building owners throughout Canterbury."