"... One of New Zealand's oldest galleries, built in 1899, the original facade is still visible in the foyer through high windows.

The entrance, once hidden behind the reception wall is on show again, with the original window frames painted in "Nelson Red".

The matai floorboards are another feature that have been retained. They were lifted to allow for earthquake strengthening before being lowered again.

"We really wanted to keep the floor," Catchpole said. "It has had people walking on it for 117 years."

The beams in the original gallery have been exposed, resulting in a "beautiful" space. ..."

"A glimmer of hope appeared for the supporters who are fighting to save an historic grandstand in Golden Bay."

President of the A&P Association Duncan McKenzie stood up at the Golden Bay Community Board meeting in Takaka on Tuesday with a surprise announcement.

McKenzie said the association would donate more of the grounds to the Tasman District Council for carparking at no extra cost, subject to approval at the next meeting.

"There's rumours that the A&P aren't supporting saving the grandstand but that's not really true," he said.

"We do want to keep the grandstand for the shade and elderly people to sit in. The reason we have not been pushing for it is because we still have to work with the Golden Bay sports recreation group and we don't want to burn our bridges there too much. But we definitely want to keep it." 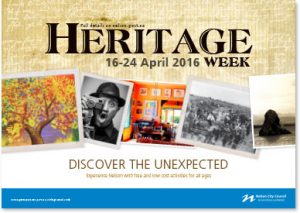 Discover the unexpected! Over 30 free and low cost activities to enjoy in Nelson’s Heritage Week 2016. Discover how the past impacts on the future, and how Nelson’s community comes forward to share interesting stories and activities that highlight why Nelson is a very special city

"Heritage building gets fresh look" Nelson Mail
"The founding building of a Nelson tertiary institution is getting a makeover. ..."
http://www.stuff.co.nz/nelson-mail/news/10277585/Heritage-building-gets-fresh-look

Nelson Heritage Supporters are expressing concerns about the condition of a local heritage house: Rutherglen.

Nelson Mail article on the removal of trees for the planned redevelopment "revealing a glimpse" of the Suter Gallery's original front entrance.

Nelson Mail has an Editorial on Heritage:

"Quake policy 'borders on hysteria'" The Nelson Mail reports on reaction to the release of the Earthquake-prone Building Policy.