Fifty members of the Whanganui Regional Heritage Trust were urged to get out and tell the stories of our heritage places by James Blackburne (pictured), President of Historic Places Aotearoa, at the trust’s recent annual general meeting in Whanganui.

James, an architectural partner based in Gisborne, has been working hard since the formation of Historic Places Aotearoa in 2010 at building a network of likeminded, independent regional heritage organisations in New Zealand.

END_OF_DOCUMENT_TOKEN_TO_BE_REPLACED 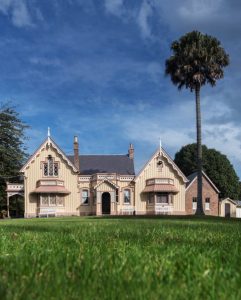 Auckland’s Own Art Deco Day Out will make a grand entrance once again at Highwic on 8 April (1pm to 6pm).

The 150-year-old mansion in Newmarket, which is cared for by Heritage New Zealand, will throw open its gates for the annual festival of all things Deco including live jazz performed at the Cup Cake Café on-site, and a sparkling array of classic cars from the days of flappers and swingers.

Refreshing G&Ts will also be on sale for the day at Hendrick’s Gin Bar, and a range of stalls selling quality vintage products will also be operating within Highwic’s grounds.  If that isn’t enough, Highwic’s shop will also be selling its range of Victorian style vintage greeting cards, games, books, crafts and more.

The hotly contested Glory Days Costume Competition will be held once again.  The contest is free to enter and fabulous prizes from Minnie Cooper, Glory Days, Hendrick's Gin and Highwic will be awarded to the Best Dressed Lady, Gent and Child.

The team from Gin Mill Swing will also host a free dance class early on so people can learn some fancy moves before dancing the afternoon away to live jazz from the New Orleans Joymakers.

“The $5 admission fee is also great value, enabling people to look around Highwic – though it will pay to bring some extra cash to enjoy some of the other attractions we’ll have on-site,” she says.

For more information on Auckland’s Own Art Deco Day Out – including parking directions – visit http://www.heritage.org.nz/news-and-events/events/highwic-art-deco-day

Ticking along in style at Alberton 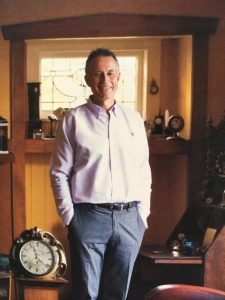 Currently on display at Auckland’s Alberton as part of the ‘Collector’s Cabinet’ series, is a fascinating selection of clocks, watches, timepieces, watchmakers tools and other collectibles belonging to horologist and historian Terry Sutcliffe (pictured).

Part of a collection of over 100 items, usually on display in his living room and in a purpose-built private museum on his property, the selection dating from the 19th and 20th centuries, includes pocket watches with New Zealand inscribed dials, military and railway watches, stands, cases, keys and intricate tools.  A marine chronometer salvaged from one of Auckland’s best-known shipwrecks, the SS Wiltshire – the steamship that hit rocks on Great Barrier Island in May 1922 – also features.

“You never have a full collection – there’s always more to find,” says Terry.  Currently researching early watch making and retailing in New Zealand, Terry is keen to hear from members of the public with any connections to this industry and is seeking timepieces, branded watch keys, boxes, old shop signage, business cards, photographs and papers to trace this history.

To learn more about the collection come to a talk on Sunday 4 March at 1.30pm. This will be an informal chat followed by a Q&A and tea.  Bring along your own timepiece for appraisal and share its story. 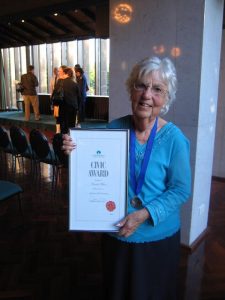 Pam Wilson began work for the New Zealand Historic Places Trust (NZHPT, now Heritage New Zealand) after being on the branch committee for some years in the early 1980s.  She worked on the Women’s/Promotions Committee, focusing on advocacy for heritage conservation, raising money to help with projects and elevating the profile of the organisation generally, including gaining more members.  In January 1989 Pam began work as the NZHPT Regional Officer for Canterbury, based first in a tiny office in what was then the Peterborough Centre, administered by the Arts Centre.  The office moved for a short time into the Cranmer Centre and then to the former Canterbury Provincial Council Buildings.  Gradually other staff joined Pam and, with her leadership, the team made huge strides in the recognition and protection of a wealth of historic places throughout Canterbury and the West Coast.

Pam was instrumental in saving many historic places in Canterbury and the West Coast, including the Nurses' Memorial Chapel and the Edmunds Factory Gardens.  She sat on many trusts, including the Riccarton House and Bush Trust and the Ngaio Marsh House and Heritage Trust, and was on 'cup of tea and biscuit' status with all of the Category 1 owners of Canterbury's large homesteads.  She was also a very astute negotiator and would front to developers and tell them how important historic places were.

By the time of her retirement in 2007, Pam’s office had been in the NZHPT offices in Gough House on Hereford Street.  Practically every file we open in the Christchurch office has her handwriting or other mark of her involvement, and even after she officially retired, she helped with work on research and registrations, such as the Kate Sheppard House in Ilam.  Like the rest of us, she was devastated about the loss of so much heritage in the Canterbury quakes of 2010 and 2011, but rejoiced in what has been able to be saved.

Pam was an absolute legend and her deep knowledge, kind and gentle manner, curiosity and dedication is widely recognised, both within Heritage New Zealand and in the wider community.  In 2007 she received two distinguished awards – the Christchurch City Council’s Civic Award and the New Zealand Order of Merit for services to heritage conservation.

Robyn Burgess and Heritage New Zealand has generously given us permission to post the Tribute to Pam Wilson that appeared in  Heritage This Month March 2018.