"Three Wellington sites have been given the heritage tick, including a controversial set of flats and the currently closed Central Library.

The heritage value of an outstanding archaeological landscape in Whangarei dating back to the earliest days of human settlement in the area has been recognised by Heritage New Zealand Pouhere Taonga.

Tawatawhiti / Mair’s Landing – owned by Whangarei District Council – has been added to the New Zealand Heritage List / Rarangi Korero as a Historic Area. The listing formally identifies it as a place of heritage significance. 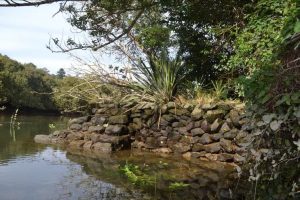 “It also includes Mair’s Landing itself, which is likely to be the oldest surviving European structure in Whangarei City. The historic area is rare in that it spans a long period of human settlement.”

The combination of fresh and sea water, together with rich volcanic soils, meant that Tawatawhiti would inevitably become a centre for settlement – and that’s exactly what happened.

“You can also see basalt rocks of varying sizes that were stacked to form a rock wall as part of a Maori horticultural field system. Stone-faced terraces constructed specifically for gardening or living areas – as well as stone heaps [puke] that were used to increase the temperature around the plant roots to assist their growth – are also clearly visible.”

Although there are no firm archaeological dates for the field systems, they are probably hundreds of years old according to Bill.

“As well as being a Maori archaeological landscape, the story of Tawatawhiti / Mair’s Landing is also one of people who have changed the landscape for their own purposes over generations,” says Bill.

“When Gilbert Mair and his family moved to Whangarei in 1842, for example, they used some of the local rock to build a stone jetty. It still exists today and is one of Whangarei’s oldest historic structures associated with early European settlement.

"Wāhi tupuna is a new classification under the Act – and Waitangi is the first Wāhi tupuna to be added to the New Zealand Heritage List."

The Media is as follows: END_OF_DOCUMENT_TOKEN_TO_BE_REPLACED

Nelson Heritage Supporters are expressing concerns about the condition of a local heritage house: Rutherglen.