Three independent and highly qualified judges will assess the inaugural Whanganui Regional Heritage Award entries, with the results to be announced at the Awards Ceremony and opening of the Whanganui Heritage Month on 1 October.

END_OF_DOCUMENT_TOKEN_TO_BE_REPLACED

Whanganui Regional Heritage Awards (2020) are being held this year.

The Awards night marks the official opening of Whanganui Heritage Month and the Awards Ceremony.

Link to web site below:

"It’s great to see the growth of the awards, as the number and quality of entries increases each year. It’s a very clear sign of the heightened awareness of the importance of built heritage to the future of our city and of the investment that people are prepared to make for that future."

The Media Release is as follows: (sourced form www.Scoop.co.nz) END_OF_DOCUMENT_TOKEN_TO_BE_REPLACED 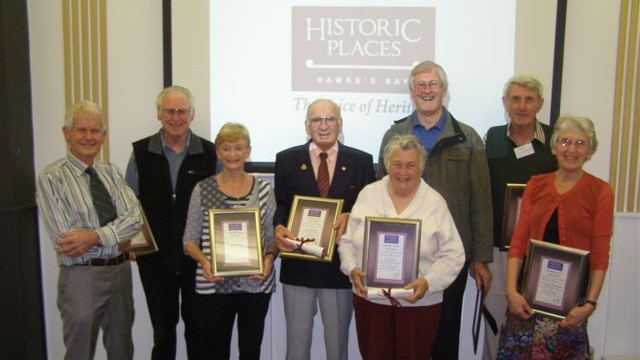 Historic Places Hawke's Bay recently held a successful awards ceremony attended by a number of members to honour long serving past members of the local branch committee of NZHPT.  END_OF_DOCUMENT_TOKEN_TO_BE_REPLACED

The following were recognized in the-

"Credit where it is due" Paul Tankard in the O.D.T. suggests awards be instituted for best restoration of heritage building and one for streetscape.