"The New Zealand Institute of Architects is dismayed by the decision of Department of Conservation Deputy Director-General Mervyn English to demolish the Aniwaniwa Visitor Centre, and urges the Department to reconsider this decision urgently.

“John Scott’s architecture was original, and his importance to New Zealand architecture is increasingly recognised,” said Institute of Architects President Christina van Bohemen. “The Institute awarded John its first Gold Medal for career achievement in 1999 and just last year named its award for public architecture in his honour.”

Ms van Bohemen said the 1976 Aniwaniwa Visitor Centre is one of John Scott’s most significant works. Scott also designed Wellington’s acclaimed Futuna Chapel, which was itself threatened with demolition before its reprieve and subsequent restoration.

“The Department of Conservation proclaims on its website its commitment to New Zealand’s unique legacy and enjoins us to pass it on. So why is Mr English determined to demolish a building that Heritage New Zealand has found to be of outstanding significance?”

The Media Release is as follows: END_OF_DOCUMENT_TOKEN_TO_BE_REPLACED 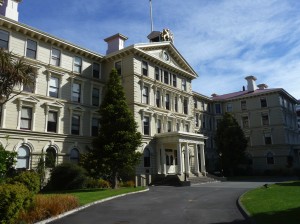 "If the walls could talk, then Wellington’s Government Buildings walls would have plenty to say. From this Saturday, 12 January until Easter weekend, the 136-year-old former seat of government will be open for visitors to explore and hear some of those stories from the past." Media Release
END_OF_DOCUMENT_TOKEN_TO_BE_REPLACED

In 2011, the Department re-commenced a review of the Conservation Management Strategy (CMS) for Canterbury.  Conservation management strategies are 10-year strategic documents that set the direction for how the Department will manage places and focus our work over the next decade. END_OF_DOCUMENT_TOKEN_TO_BE_REPLACED

Otago Conservation Management Strategy Consultation:
"You are invited to make a submission; these are due with us no later than 4.30pm on Friday 13 September 2013."