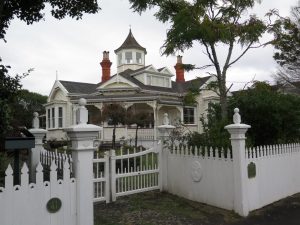 Heritage New Zealand has listed Philson House in Stanley Point Road as a Category 2 historic place on the New Zealand Heritage List - Rarangi Korero. The house has been described as a prime example of a corner bay villa design ‘of ornate turreted style’.

“Philson House is a great example of the bay villa at its most elaborate and ornamental, and other aspects of its history that make it valuable,” says Heritage New Zealand’s Heritage Adviser Registration, Martin Jones.

The Media Release (and Philson House History) is as follows:

One of Devonport’s landmark villas has been recognised by the country’s lead heritage organisation.

Heritage New Zealand has listed Philson House in Stanley Point Road as a Category 2 historic place on the New Zealand Heritage List - Rarangi Korero. The house has been described as a prime example of a corner bay villa design ‘of ornate turreted style’.

“Philson House is a great example of the bay villa at its most elaborate and ornamental, and other aspects of its history that make it valuable,” says Heritage New Zealand’s Heritage Adviser Registration, Martin Jones.

“The house – with its distinctive belvedere lookout tower – is associated with notable Devonport people, including famous boat builder Robert Logan Junior, who originally owned the land and may well have been involved in the construction of the house along with his uncle, James Logan.”

Robert Logan Junior was an important figure in the development of boat construction in New Zealand, and founded the successful local and international firm R. & A. Logan – later Logan Brothers. Logan boats are an important part of New Zealand’s maritime heritage, and are still highly sought after today.

Robert Logan expanded his interests to include property development in the early 1900s, when the villa was the house style of choice for Auckland’s middle classes. Over previous decades, the widespread construction and visually appealing design of this type of house had shaped the character of Auckland’s inner suburban landscape, as well as a great many suburbs in other New Zealand cities. For those with a bit more disposable income to invest, however, the villa style also provided scope for embellishment.

“Expensive versions of the villa became increasingly elaborate around the turn of the century, incorporating angled bays, complex roofs and large verandahs, along with features like belvederes and especially fancy fretwork,” says Martin.

Philson House is a prime example. Built in 1903-4, the house was a genteel residence with decorative features from the American Queen Anne and Eastlake styles of architecture.

Modern settlement of Devonport dated back to the 1840s with the establishment of a British naval station. Crown land was subdivided into residential sections in the 1850s, and once reliable ferry services were established to and from Auckland in the late 1800s, Devonport boomed.

However, it retained strong military connections. Described in 1902 as ‘the warrior warden or protector of Auckland’ for its naval presence and artillery defences, Devonport’s civilian and military populations increasingly intermixed – a unique aspect of the settlement that has been reflected in the owners and residents of Philson House over the years. Devonport was also noted for its maritime and broader recreational associations.

The Worralls were only short-term residents in the property, however, as a more grand residence was built for them on adjoining land. Two years after Philson House was built, new owners – the Philson family – moved in.

“Thomas Philson was a retired banker, and the son of one of Auckland’s most prominent medical practitioners and health officials,” says Martin.

“He and his wife Catherine had four children – Wilmett, Roger, Geoffrey and Edith.”

The house would have been the perfect family home, though the family’s seaside idyll wouldn’t last forever as international events were to prove. In 1914, each member of the Philson family was playing a role in New Zealand’s First World War effort, as would have been expected from a family with their social standing.

Wilmett, for example – the eldest son – was a talented cricketer, athlete and lacrosse player who had moved to the King Country in 1909. When war was declared, he immediately joined up and was in the first batch of volunteers in the 16th Waikato Regiment which left New Zealand in October 1914.

“Sadly, Wilmett was one of more than 100 New Zealanders killed on April 25, 1915 – the first day of the Gallipoli campaign, and the day now commemorated every year as Anzac Day,” says Martin.

“A press report said he was ‘at the landing on Gallipoli, got over the hill, and then gave his life for the Empire’. Wilmett’s name is remembered at St Augustine’s Memorial Church in Devonport as well as the Auckland Grammar School War Memorial – both listed with Heritage New Zealand.”

Other Philson family members served with distinction during the war. Having grown up beside New Zealand’s main naval station at Calliope, middle son Roger was appointed a lieutenant in the Royal Navy’s Motor-boat patrol in the North Sea in 1917-18; youngest son Geoffrey was awarded the Military Medal for bravery in the field while acting as a stretcher bearer on the Western Front; and Edith – the only daughter – trained in ambulance work in 1914 and donated money to a hospital ship during the war.

Subsequent owners included retired shipping superintendent for the Northern Steamship Company, Gabriel Ross, and company director William Edney who also served as a Lieutenant, then Commander, of several subdivisions of the New Zealand division of the Royal Navy. Edney’s tenure again reflected the close link between some of Devonport’s residents and the naval base.

The house was used as a rest home from the 1960s until about 2000, when it was converted back to private residential use.

“Architecturally, Philson House is considered to represent the villa at the peak of its development,” says Martin.

“The house also has important links with the maritime and social history of Devonport and New Zealand. It is a stand-out example of a visually elaborate and ornamental villa.”