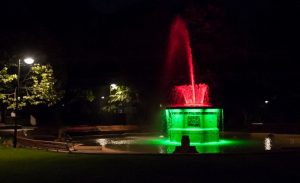 Dr Anna Crighton has generously provided us with the text of the speech she gave at the Victoria Square Re-Opening.