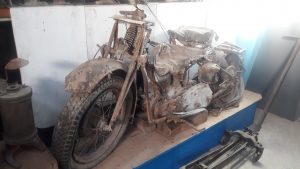 Was it an accidental wrong turn? Was it an ill-timed twist of the throttle? Was it the result of a night’s inebriation that may have led to a Court Martial? Nobody knows.

But one man would certainly like to find out.

Jack Kemp – a volunteer researcher for Heritage New Zealand Pouhere Taonga – is keen to learn more about how this Army Indian Scout motorcycle (pictured) wound up in a swamp near Kerikeri.

“The army motorcycle had been retrieved from the swamp some years ago, and is now being cared for by members of the Vintage Car Club in Whangarei,” says Jack.

“People believe the motorbike found its way into the swamp during World War II, but nobody knows the circumstances in which the bike disappeared.”

Jack is appealing to anybody who may know – or may have heard stories, perhaps from family members in the past, about how the classic army motorcycle ended up in a bog.

“As part of carrying out research for Heritage New Zealand’s heritage inventory of war sites in Northland I have been involved in a number of oral history interviews, including people sharing mementoes and photographs from the war,” says Jack.

“We’ve discovered pictures of mysterious American float planes landing in Mangonui and a mine sweeper clearing sea mines from the Bay of Islands – and when we’ve put them out in the public domain it’s been amazing how much more information people have been able to share about them. We’re hoping we can pull it off again with our formerly submerged Indian.”

The Army Indian is made by the same company that made the Indian Scout motorcycle that was suped up by Invercargill speed king Bert Munro in his successful bid to break the motorcycle under-1000cc world record at Bonneville in August 1967. His epic run was later made famous in the movie The World’s Fastest Indian.

Although much loved by Munro, the Indian was not an easy motorcycle to drive as Heritage New Zealand’s Northland Manager Bill Edwards can attest.

“When I was younger I owned, briefly, an Army Indian Scout 741B. It was only 500cc, and was a very difficult bike to drive, with the right hand throttle set for ‘advance’ or ‘retard’ to line up the pistons properly for ignition. It also had a gear stick and a foot clutch. The throttle was operated by the left hand grip, and oddly enough you had to take your hand off the throttle to change gears,” Bill says.

“Presented with such a complex sequence of operation I can see how a driver could lose control of the bike quite easily during a tricky manoeuvre – or even encountering something a bit unexpected on the open road.”

Whether the complexity of operation was a contributing factor to the motorcycle ending up in the clag, or whether other factors came into play, the mystery of the misdirected Indian is worth following up according to Jack.

“Our research has touched on the daily lives of men and women in military service, volunteers and civilians, all of whom have shared some wonderful stories with us,” says Jack.

“We’d really love to hear the story of how the driver of this military motorbike may have taken the thrill of off-roading just a bit too far.”

Do you know what happened to the Army Indian motorcycle? Contact Bill Edwards on Ph 09-407-0471 or email bedwards@heritage.org.nz