This is a story about time (a clock), but also a story of changing times and times of change!

Firstly a grand time – a time when Ashburton was proud to the point of boasting about its marvellous new Post Office and clock tower! Today we all carry time tellers (phones/watches) but over a century ago they were much rarer and the town clock dominated the landscape with its importance. It not only displayed, but also chimed the time.

It hadn’t come easily though. After years of talk, a fire in 1900 finally forced the hand of government to decide to erect a new building. It came at a cost of 4000 pounds, not including the ‘all important’ clock. It is interesting to note that in the year 1900 a total of 414,069 articles were posted in the Ashburton Post Office. 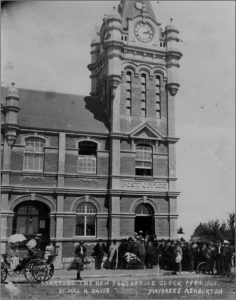 The new Post Office opened in 1903 with the clock tower empty. Although the mechanism was ordered in August 1902 from Messrs Little-John and Sons of Wellington, it arrived and was installed in early 1904 at a handsome price of 820 pounds. This was paid for by Borough and County Councils, local subscriptions and a government subsidy.

At the official opening the mayor Mr John McLachlan said he was sorry to say his suggestion that the Post Office be constructed of Ashburton bricks and Mount Somers stone had not been carried out, so the present building was not so great a credit to Ashburton as it might have been. As for the clock, he said he had told postmaster general, and later Prime Minister Sir Joseph Ward, that unless he give Ashburton its clock, he had better not show his face here again!

Early in 1945 the threat to remove the town clock brought the towns citizens anger to the boil.

The postmaster general, Hon P.C. Webb, had announced that the clock tower in the post office building was an earthquake risk and would be demolished. No doubt he was afraid after the many deaths that falling masonry caused in the 1931 Napier earthquake and Wairarapa 1942 earthquake.

Despite public outcry and although councillors picked up the gauntlet, it was a David and Goliath contest. Costs to strengthen the tower were deemed too high. Instructions for its removal were issued in January 1946. On March 9, 1946 the newspaper struck out by saying – 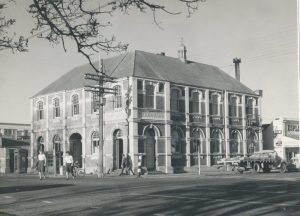 “Time marches on, but we have no town clock to record the fact”. This was no comfort to the hundreds of travellers along the main road south whose watches could no longer be set.

Fortunately, the clock and its mechanism, was carefully put into storage once removed.

Changes in post and telephone exchange systems, along with a growing Post Office Savings Bank created a ‘need’ for a new Post Office building. This was built on the site of the former Post Office, corner East and Cameron Streets. It was best described in the local newspaper as “being two stories high, made from reinforced concrete, the new Post Office is designed along clean, simple lines to harmonise with the adjoining automatic telephone exchange.” In November 1963 the Minister of lands, Gerard, laid the foundation stone. The building cost was 104,000 pound.

In 1977 Jack Ross published a book “Focus on Ashburton, NZ”. He poignantly wrote;“What more graphic illustration of the ‘price of progress’ could be given than these three photographs of the Ashburton Post Office? This site… has been the home of the Post Office since the turn of the century and when the first fine brick building shown here was erected – a building of character and distinction which, today, had it still been in existence, would have caught the eye of thousands who travel the main north/south highway. After being altered considerably it was demolished… and replaced by a much less ornate concrete structure. No doubt the interior facilities of the earlier offices became inadequate for modern day requirements, but the demolition of such buildings lessens the number of the town’s aesthetic features.”

Some of you might remember a ‘tacky’ era of the present day post office and telephone exchange when one was painted pink and the other mauve – creating many a snide comment! 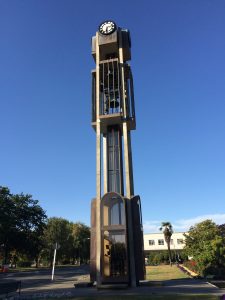 The old clock face in the present clock tower

At 4pm on Friday November 26, 1976 the former Post Office clock and chimes sprung back into action, installed in a new tall standing clock tower, in Baring Square East. It commemorated 100 years of local government in the Ashburton County.

The Ashburton Lions Club, which undertook restoration of the clock as a project, spend nearly 400 man hours on it. The clock was said to have virtually no signs of wear, despite 42 years of service in the old tower. There were no instructions for assembling the clock mechanism, which is now encased in a glass surrounding, and the job was likened to putting together a giant jig-saw puzzle.

On starting the clock again, Mayor Darcy Digby said ‘the clock was an important edifice for Ashburton and its likeness would be reproduced around the world on postcards.’

How right Mr Digby has been!!!