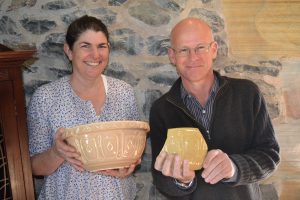 Bowl remnants found in the mix

An archaeological excavation as part of earthworks associated with a new sprinkler system for Pompallier Mission has uncovered evidence of some delicious baking.

Remnants of a ceramic mixing bowl, understood to be manufactured in the 1800s by British ceramic firm Mason – the fore runner of today’s Mason and Cash – were discovered as part of the recent excavation that took place adjacent to Russell’s Pompallier Mission.

The historic property is cared for by Heritage New Zealand Pouhere Taonga.

“The excavation was carried out as part of the conditions of an archaeological authority which was granted for earthworks associated with the new sprinkler,” says Heritage New Zealand’s Northland Archaeologist, James Robinson.

“This area was identified as potentially having archaeological features present, and the authority process enabled it to be excavated carefully as part of earthworks for the sprinkler system. The bowl, bottles and other items were found in a rubbish dump that was part of the excavation area.”

“Dating and analysing the function of these items can provide us with good evidence of what was going on at this site many years ago.”

Because the property has been in continuous use, it is not completely clear what period the bowl dates from, though initial analysis suggests the bowl could date back to the 1800s. It’s likely that the bowl broke – perhaps while the owner was whipping up a batch of pikelets, or a similar delicacy – and the bits duly chucked into the rubbish heap.

The mixing bowls are not exactly rare – though they have a special connection to another historic property that Heritage New Zealand cares for according to James.

“Mason Cash and Co replaced the Mason brand in 1901, and Mason and Cash is still going strong. Mixing bowls almost identical to the one that was discarded in Russell all those years ago, are on sale at the Stone Store along with a range of other authentic trade goods from the 19thCentury,” he says.

“There’s a nice continuity there.”

“We love selling products with brands that have endured for years, and Mason and Cash is definitely one of those,” she says.

“Mason and Cash still make the classic cane-coloured mixing bowl, as well as new designs that are more contemporary and funky. The brand is still very much alive – even after over two centuries.”

Installation of Pompallier Mission’s sprinkler system is expected to be completed by summer.