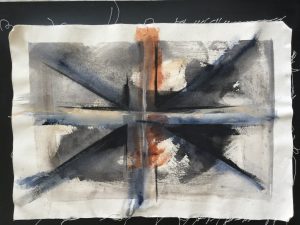 One of the artworks which are part of The Constant exhibition. (Image Source HNZ Media Release)

Northland artist Dianne Trewin attended a talk by Heritage New Zealand’s Northland Manager, Bill Edwards earlier this year, looking at the various flags that have served as New Zealand national ensigns over the years, and the different stories behind each flag.

“This lecture for me was the kick start for the exhibition,” says Dianne.

Entitled The Constant, the exhibition is Dianne’s personal response to the flag referendum of 2015, and encapsulates some of the passion displayed from all sides of the discussion. The name derives from Dianne’s conclusion that the one constant throughout the different debates about symbolism and design was the land, sea and sky.

Her interest in the issue of changing the flag has been a long-standing one.

“I’ve had an ongoing interest in this since 1973, and then again in 1986 when polls were again held which called for no change,” she says.

Initially, Dianne envisaged a series of representations of the United Tribes flag hung upside down as an indication of distress. Once she began, however, inspiration kept coming.

“I found images of the Union Flag and others, which gradually receded as the Southern Cross, the land Aotearoa-New Zealand and the ocean came to the fore,” she says.

“Looking at our various national flags, the constancy of the Southern Cross became very apparent to me. Anything else could be considered a logo.”

As the exhibition pieces evolved, Dianne’s artwork became increasingly organic to include ceramic flags. The two dimensional works incorporating the union image – although still apparent – receded into the background while the Southern Cross, the sea and land increasingly made their presence felt.

Some of Dianne’s artwork was even buried in the ground to investigate the direct impact of the land on these works. Other pieces have been created on building paper – a nod to building bridges between the inhabitants of Aotearoa-New Zealand and the land itself.

A critique of the exhibition by Laurence Clark highlights some of the themes examined in the exhibition, including the idea that “there is no correct way to hang a flag”, noting that an earthy-coloured flag similar to our current flag is “designed to be hung upside down, as if in distress”. He also observes that “when hung the familiar conventional way, the flags seem to have a calming effect”.

Clark acknowledges Trewin’s personal response to last year’s flag referendum through her exhibition, which he says has absorbed the polarisation of public opinion.

“This show reinstates her discipline, perseverance and purity of intention,” he says.

The Constant is on at the Hangar Gallery, Kamo until November 4.