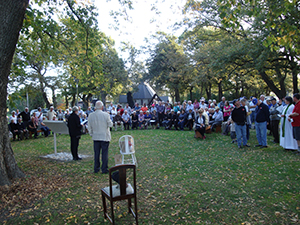 Over 100 people attended the public launch of Historic Places Mid Canterbury. They  witnessed  the last activity of the Ashburton Branch NZHPT with the unveiling of the Barrhill Village Interpretation Panel. Malcolm Duff the Southern Regional Manager in his opening remarks announced it was one of his last public duties as he was leaving NZHPT for sunnier climes. 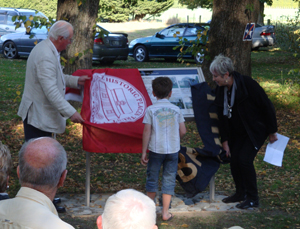 At the unveiling ceremony Anna Crighton [recently re-elected as a NZHPT Board Member] and Malcolm Duff presented framed certificates  to a number of individuals recognizing their contribution to the Ashburton NZHPT  Branch Committee. The interpretation panel was then unveiled by Malcolm, Anna and young Jack a sixth generation Barrhill resident. Anna Crighton as President of Historic Places Aotearoa warmly welcomed the new regional society of Historic Places Mid Canterbury.

Under the glorious autumn sunshine Corwar Lodge and Barrhill Church were open for public viewing.
The Ashburton Family History Group put on a  great Barhill Cemetery Walk and Talk.
The Afternoon Tea [ at the Hall] had an exhibition of the lost Ashburton buildings.

P.S. Ashburton Railway Station is still standing and they are fighting hard to save it!