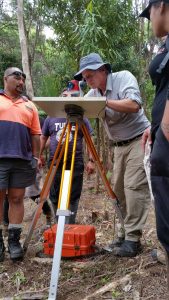 Dr Robinson, who is the Northland Regional Archaeologist for Heritage New Zealand, ‘went bush’ to use his specialist expertise in map drawing to help record Hungahungatoroa ( Pa – a gunfighter pa dating back to the 1860s – in the Karakatuwhero Valley near Te Araroa on the East Coast.

As well as being able to see how archaeology can assist in learning history, the students had an opportunity to hone up their own map-making skills with support from Land Information New Zealand.

“The importance of this site is reflected in its inclusion in the Ngati Porou Deed of Settlement. The mapping project was a follow-on from a project started a number of years ago led by DoC and Te Runanga o Ngati Porou,” says Dr Robinson.

“Iwi have persevered for seven years to get the mapping work underway, and it was a privilege for all of us to be involved in this important post settlement project. It was particularly good to hear some of the stories that were shared from people like local researcher Tumuaki Campbell Dewes. It all helped us to piece the evidence together.”

Hungahungatoroa Pa was established by followers of the Hauhau movement in the 1860s. Hauhau – also known as Pai Marire – rejected both Christianity and British colonisation, and was readily adopted by Maori facing displacement from their tribal lands.

“The Hauhau made their last stand at Hungahungatoroa Pa, though they were eventually overtaken by government forces due to the heavy assault of gunfire from the numerous attackers,” says Dr Robinson.

Survivors of the assault on Hungahungatoroa were made to swear allegiance to the Queen. Chiefs were then shipped to the Chatham Islands for imprisonment, though later escaped with Te Kooti Rikirangi Tu Turiki.

According to Hal Hovell, a DoC Ranger of Ngati Porou descent who helped oversee the mapping project, Hungahungatoroa Pa represents a sad time of civil war for Ngati Porou, with family pitted against family.

“Little is told of Hungahungatoroa maybe as a time best forgotten by the whanau of that time due to such deep family hurt,” he says.

“The map will provide a window into our past so our generations can learn about Ngati Porou history and warfare, and look to continually mend the hurt of the past.”

Many of the pa’s features – including musket trenches, artefacts and kumara pits – are still visible, which enabled the team get a good idea of how the pa functioned, both as a place where people lived and also from the perspective of defence.

“The pa itself was an impressive palisaded stronghold deep in the bush and was believed to have been impregnable,” says Dr Robinson.

The site of the pa was an older traditional pa designed when close quarter weapons such as patu and taiaha were primary weapons. According to Dr Robinson, the advent of the musket as a long distance weapon in the early 1800s made these older pa defences obsolete.

“At some time prior to the 1865 battle, the defenders adapted the core of the older defences into a gunfighter pa. This can be seen clearly on the ground where the 1865 archaeological features consist of an encircling ring of musket pits and trenches within which are terraces and food storage pits – along with historic artefacts that relate to both the battle and domestic activities,” he says.

Outside these historic defences are a number of terraces thought to relate to the older pa.

“The last drawing of the site was a brief sketch made in 1979 and so this detailed and accurate map will assist Te Runanga o Ngati Porou in managing the site into the future,” says Dr Robinson.

Hungahungatoroa is part of the Pukeamaru Scenic Reserve, and is the first of a number of pa to be mapped in the Ngati Porou rohe. According to Hal Hovell the community plans to map 36 of these in the future.

“It is great to have all the experts with our local knowledge joining forces to get a look into our rich history. We will not always have the experts available to come up the Coast, so the vision in involving our tamariki and community is to give them the tools to continue mapping our pa and stories,” he says.

The map is expected to be available by the end of March, and HNZPT and DOC staff will deliver a presentation to Te Runanga o Ngati Porou on the project.