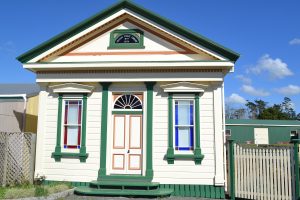 "The heritage significance of one of the Northern Wairoa’s earliest surviving timber buildings – once used to foster education, intellectual enlightenment and social stability – has been recognised by the country’s lead heritage organisation."

"Originally built in 1874 at Aratapu as a school house, the building has been relocated and now serves as the music wing of the Dargaville Museum. Aratapu was also known at the time as ‘Sawdust City’ because of the vast quantity of sawdust produced by its kauri sawmill."

Originally built in 1874 at Aratapu as a school house, the building has been relocated and now serves as the music wing of the Dargaville Museum. Aratapu was also known at the time as ‘Sawdust City’ because of the vast quantity of sawdust produced by its kauri sawmill.

“It may be hard to believe today, but in 1878 the Aratapu sawmill was the largest in the country employing about 300 men with an annual production in its heyday of 4.2 million metres of timber,” says the Manager of Heritage New Zealand, Bill Edwards.

“The Aratapu Library building originally began life as a school house, with a small library operating out of one end of the building. Two years after it was built, a small antenatal room was added by the Independent Order of Good Templars – an organisation that believed in community-based interventions to reduce the social harm caused by alcohol. It’s interesting that the school teacher at the time, John Chilman, held a high post within the movement.”

In 1879 a new school building was constructed, and the former school / library building was taken over by the library committee. The library was an attempt to foster family and community life, as well as ‘sober pursuits’.”

Alcohol was the main cause of disorder in the district with many petty crimes and accidental deaths caused by the ‘demon drink’.

“The good citizens of Aratapu tried to combat the effects of excessive drinking through organisations like the Mutual Improvement Society, the Band of Hope and the Order of Good Templars,” he says.

“The Aratapu Library sought to promote self-improvement through literacy, while providing a place for leisure activities like chess and draughts – and was an attempt to try to control the influence of alcohol by providing alternative activities for people that were more constructive than drinking.”

Beautifully built by craftsmen from the Union Sash and Door Company which operated out of the Aratapu sawmill, the building was constructed from local timber in classical Greek style, and was designed to emulate high culture associated with intellectual self-improvement.

“The library building’s carpentry detailing raises it above the ordinary – right down to columns on either side of the building’s windows with pointed pediments above each,” says Bill.

“On the outside there are details such as friezes, architraves and dentil mouldings crafted from timber, with stained glass and the original central fanlight over the door representing a rising sun. These features give the building strong aesthetic value while also showcasing the use of wood in a way that sets out to imitate a stone building from the classical period.

“In its own way, this modest frontier building is a triumph of the carpenter’s art.”

The library flourished over the years, and by 1884 had an impressive 700 books in its collection. Members were also able to play chess, draughts and cards in what was the original anteroom – though the occasional incidence of drinking, gambling and fighting sometimes caused a small hiccup in the library achieving its lofty goals of sobriety and self-improvement.

By 1894, however, membership had declined to 13 people – blamed partly on its Monk Street location which had largely become deserted. Benefits were held in 1894 and 1895 to raise funds for the library’s relocation to the main road, and the library re-opened its doors in September 1895. Patronage increased as a result.

“As the large kauri forests around the Northern Wairoa were harvested and processed, Aratapu went into decline and timber workers and their families left town,” says Bill.

“After the kauri was gone, so too was the town of Aratapu – though a small amount of milling occurred after the Kauri Timber Company left Aratapu, such as the timber and treatment mill owned by the Glamuzina family who operated between 1946 and 1972.”

Despite Aratapu’s general decline, the building was moved again to a more central site on the main Aratapu-Te Kopuru Road in 1943 and began another life of service as a Post Office. By 1971, however, the building had become dilapidated and finally closed in 1972.

The library building was eventually abandoned, though in the 1970s was relocated to the former site of the Dargaville Museum in Normanby Street. After the museum moved to its current site at Harding Park, however, the Aratapu Library building was seen as being surplus to requirements, and given to the Intellectually Handicapped Children Society (IHC). The building was used as part of a rural training unit at Awakino Point.

After a fundraising campaign – which included a grant from the then ASB Community Trust and public donations – the building was relocated once again to the current Dargaville Museum at Harding Park where it was restored with voluntary labour and reopened in 2007.

“The Aratapu Library is a reminder of the Northern Wairoa’s early frontier days, and a remnant of the days when kauri was king, and milling this precious resource was an important activity that contributed to New Zealand’s economic development,” he says.

“The building is an important and much-loved part of the Northern Wairoa’s economic and social history.”