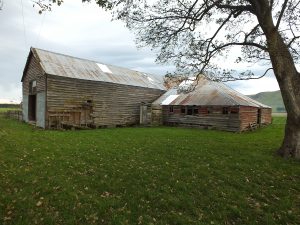 Anama Woolshed has been added onto over its long lifetime

Let us journey back to 161 years ago and paint a picture in our mind of two pioneering men, squatters from Australia, living in a large woolshed at what is now called Anama.

The woolshed was without doors or windows, no chimney, built from nearby Manuka and thatched on top and sides with cabbage tree leaves. The fire was made in the middle of the floor and at night a blanket was hung up to serve as a door. The year is 1855 and well known pioneer John Barton Acland of Peel Forest sheltered for the night in this very woolshed.

Acland wrote in his diary “Russell and Rogers, with Seward and an Irish shepherd are living, and have been living for twelve months in a large woolshed………   It is a wonder why some people will make themselves so needlessly uncomfortable.” 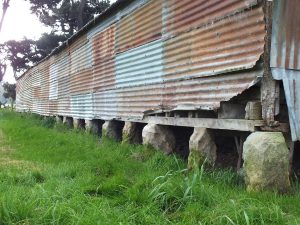 Crudely made foundation stones of limestone from the original woolshed.

The woolshed was expanded several times over its long history, reroofed and upgraded as sheep numbers grew and materials came to hand. At one stage the station carried over 20,000 sheep!

The photographs below show the crudely made foundation stones of unformed limestone and inside large manuka support timbers are displaying age and decay. Originally there were morticed railings for penning in the sheep. Scared into the timber interior walls are many dates and names, made by working shed-hands and shearers, some over a century ago.

George Gawler Russell registered Anama as a run in 1854, although he had already farmed the run for approximately three years while awaiting his application granting. Russell was an Australian squatter who came over to Canterbury soon after the settlement was started.

Russell, named the station Gawler Downs. It was one of the very early Canterbury stations. He had 2700 sheep there in 1855 and 4000 in 1858 about which time a tussock fire lit at Anama travelled right to the sea at Coldstream.

Russell died in Christchurch in 1860 and the station run and stock were sold afterwards to Gorge Alexander Anstey. Anstey did not keep the run long and sold it to W.S. Peter in 1862. By then about 17,000 sheep were on the country and at the time of sale were deemed scabby. 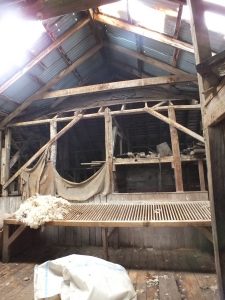 At one time the woolshed roof was shingles, some remain as shown in this photograph.

William Spence Peter renamed the station Anama, an aboriginal word, after the Hawkers’ Anama station in South Australia, where he had met and married his wife.

Anama originally contained over forty thousand acres, nineteen thousand of which Peter made freehold. The station lay partly on the plains. It ran from the south bank of the Ashburton to the south branch of the Hinds. The eastern boundary was near Mayfield, where Anama, Shepherd’s Bush, Cracroft, and Valetta all met at a corner post. Anama took in the front range of hills and ran back to the Blue Duck Creek where it joined Mt. Possession.

With over 20,000 sheep it is not hard to imagine how busy the woolshed became. W. S. Peter was a most successful breeder of merino sheep, his flock being one of the best in the country.

Splitting up the station

In 1877 road engineer Mr E.G. Wright was paid with land orders for some public work and selected the Gawler Downs on Anama, about ten thousand acres of the run, now called Surry Hills. He also purchased Windermere where he chose to reside. Wright’s road construction contracts were for a portion of the West Coast road, including that over the Otira Gorge. Later he built the Huranui Bridge, and subsequently took the contract for a portion of the Main South railway, including the bridges over the Ashburton and Rangitata rivers in 1875.

William Peter died in 1891 aged 73. His executors carried on the station until 1898, but sold a certain amount of land to the Government for closer settlement. The remainder they divided up among family. Charles Peter got the homestead block the woolshed sits on.

Names and dates carved into the wood

In 1929 Charles Peter sold the homestead block to J. Quantock. Then the slump came. Sheep and wool prices dropped, but the Quantocks kept on through the long years of the depression.

Four generations of Quantocks farmed the homestead block from 1929 up until 2011.   The woolshed served them well enough.

The historic woolshed still stands today albeit greatly changed from the humble beginnings 160 odd years ago. Sheep no longer 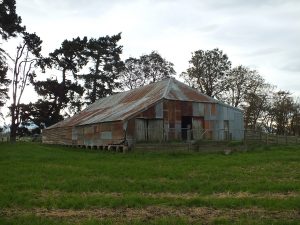 Photo of another of the older part of the shed

graze the surrounding farmland – used instead as dairy support and owned by the Morrison family. The woolshed has some structural decay which makes it unsafe to use - not that there are any sheep to pass through it anymore!

This amazing piece of our past still lives on though. It is a reminder of those hardy souls who roughed and toughed it out in a harsh new country, carving out an existence, and creating a future for the generations to follow.