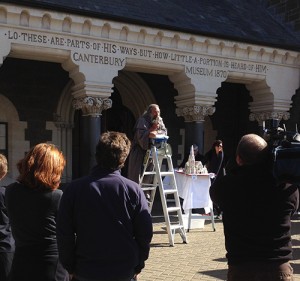 In front of the Museum at  12.00 noon [Sunday 5th April] the Wizard transcended his ladder and levitated the  passion of his oratory to ask for a Pause in the Cathedral Deconstruction.There was a TV crew filming the gathering as at one stage he asked the placard waving crowd to kneel for the Cathedral.  During the proceedings a member of the audience disputed his observations and there ensued  a classic street theatre melee. To no-ones surprise, the Wizard was in his element as befitting his years on the ladder and his undisputed power of oratory. This was filmed but not broadcasted. These happenings are to be at 12.00 Noon every Sunday.