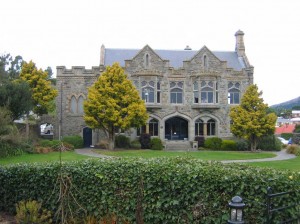 STATEMENT OF HERITAGE SIGNIFICANCE
SIGN OF THE TAKAHE
– 200 HACKTHORNE ROAD

The Sign of the Takahe is listed in the Christchurch City Plan as a Group 1 heritage building, and is registered by the NZ Historic Places Trust as a Category 1 historic place.

The Sign of the Takahe has historical and social significance for its association with activist Harry Ell, and as a key part of his visionary Summit Road scheme. The great life-long preoccupation of Ell, a politician and tenacious social and environmental campaigner, was the promotion of a summit road from Godley Head to Akaroa, providing public access to all parts of the Port Hills. Resthouses would be distributed along the route, offering refreshments and simple accommodation. The Summit Road Association was founded by Ell in 1909 to foster the objective, and although the ambitious project was incomplete at the time of his death in 1934, he had seen a substantial portion of his scheme to fruition, including the establishment of four resthouses: the Signs of the Kiwi, Bellbird, Packhorse and Takahe. The Sign of the Takahe was planned from the beginning to be the largest and most important of the resthouses. Construction of the building was initiated in 1918, and was sufficiently advanced for the Tram Terminus Resthouse, as it was then known, to open for business in 1920. Argument, financial difficulty, depression and war delayed completion however, and although the City Council had assumed ownership in 1942, it was not until 1948 that the building was finally finished. An official opening took place in 1949. The building continued in use as a restaurant and tearooms until the Canterbury Earthquakes of 2010-2011, when it sustained moderate damage and was closed to the public. Restoration and strengthening plans are being developed .

The Sign of the Takahe has cultural significance for the manner in which it, as the most well known feature of the Summit Road, commemorates Harry Ell and the thirty years of his life he spent campaigning for his far-sighted scheme. The building and the scheme with which it is associated also represent the emergence in the early twentieth century of new modes of thought, such as environmentalism and habits of leisure and recreation. The ‘healthy body healthy mind’ credo entered fully into popular culture at this time, and in association with the institution of regular holidays, saw larger sectors of the population able and willing to set out in pursuit of fresh air, exercise and new horizons.

The Sign of the Takahe has architectural and aesthetic significance as one of the most high profile Neo-Gothic buildings in the city, and may be seen as representing the last flowering of the Neo-Gothic tradition in Christchurch. Although Ell exerted considerable influence until his death in 1934, in its present form the building is substantially the work of architect John Goddard Collins. Collins, principal of the firm of Collins and West, was active as an architect through the first half of the twentieth century, and designed commercial, religious and domestic buildings in a variety of styles. Notable buildings by Collins in the gothic style include the Nurses’ Memorial Chapel at Christchurch Hospital, the chapel at Nazareth House and the Christchurch Press building. The architect became actively involved with the stalled Takahe project in 1934, and redesigned what would have been a simple Arts and Crafts building in an elaborate Tudor (i.e. with the segmental arch predominating) Gothic form. A highly ornamental building - both inside and out – was the result. The architectural significance of the building has been amplified by the significant losses sustained by Christchurch’s Neo-Gothic heritage as a consequence of the Canterbury Earthquakes.

The Sign of the Takahe has technological and craftsmanship significance for the quality of its construction and its use of local materials. Once the decision had been made to construct the building as an exemplar of the gothic style, great effort was applied to the selection of appropriate materials, and the execution of detail. The building's stone carving and interior decorative scheme, which features heraldic devices, are particularly noteworthy. The Depression provided a significant boost for the project as Ell (and his successors) were able to engage unemployed artisans under government-funded work schemes. However another corollary of the straitened circumstances of the period was a shortage of materials and tools, which necessitated a creative response. Consequently Kauri ceiling beams were cut from former bridge timbers, whilst ceiling panels were formed from recycled packing cases.

The Sign of the Takahe is located at the apex of a large sloping triangular site. The principal facade looks out over the setting, which consists of a wide lawn lined with native plantings and which culminates at a hedge. Beyond the hedge is the natural parkland of Cracroft Reserve. The building also has extensive views of the city. The elevation of the Sign of the Takahe, its large scale, distinctive architectural style and prominent site at the intersection of Dyer's Pass and Hackthorne Roads mean it is an important city landmark, and acts as a gateway to the city. Around the Sign of the Takahe are areas of housing dating mainly from the post-war decades; originally the building was above the urban area at the terminus of the tram. Although the building relates to its site and the Summit Road itself through the use of a variety of stone from the Port Hills, it is of quite a different character to the other Summit Road resthouses, which are much more modest Arts-and-Crafts inspired buildings.

The Sign of the Takahe and its setting are of archaeological significance because they have the potential to provide archaeological evidence relating to past building construction methods and materials, and human activity on the site, possibly including that which occurred prior to 1900.

The Sign of the Takahe is significant for its association with activist Harry Ell and as a central part of his ground-breaking environmental Summit Road scheme; as a symbol of new modes of recreation and leisure in the early twentieth century; as a finely crafted building by prominent city architect J. G. Collins; and as one of the last parts of the city's identity-defining Neo-Gothic heritage to be completed.

PLEASE NOTE THIS ASSESSMENT IS BASED ON INFORMATION AVAILABLE AT THE TIME OF WRITING. DUE TO THE ONGOING NATURE OF HERITAGE RESEARCH, FUTURE REASSESSMENT OF THIS HERITAGE ITEM MAY BE NECESSARY TO REFLECT ANY CHANGES IN KNOWLEDGE AND UNDERSTANDING OF ITS HERITAGE SIGNIFICANCE.

PLEASE USE IN CONJUNCTION WITH THE CCC HERITAGE FILES.