One of Napier's Oldest Streets
Napier is known as New Zealand's art deco capital because in 1931 this was the style of architecture chosen for rebuilding the city after the Hawke's Bay earthquake. But there is much more to Napier's built heritage than this. 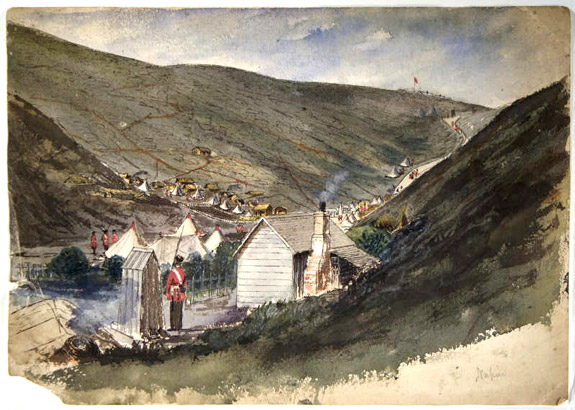 Imperial troops quartered at Napier. A watercolour by surveyor Robert Park of the Onepoto Valley during the early 1860s. The route of Main Street can be seen winding its way up the gully with a glimpse of the flag flying at the Gore-Brown Barracks on the skyline; later to become the site of the Napier Public Hospital. Image: Canterbury Museum

The valley of Onepoto (meaning short beach) was a gathering place for Maori long before the first Europeans stepped ashore there. Sited on the shore of Te Whanganui-a-Orotu (the inner harbour) Onepoto formed part of a source of abundant kai moana (food from the sea) and a series of landing places and villages that proliferated round the shores of the harbour. The Ahuriri locality that became the site of Napier was attracting European settlers as early as the 1840s – making it one of the foundation areas of New Zealand's colonial history. When Scotsman, Alexander Alexander built a shed at Onepoto in 1846 and began buying pigs and dressed flax from local Maori, he was the first European settler to live and work in what would, within 10 years, become Main Street – now one of Napier's oldest streets.

In 1857 the route of the steep, narrow road that today winds its way up the hillside was formed and the following year 120 soldiers from the 65th Regiment arrived in Napier in response to anxiety among the European settlers about “native unrest”. The men camped in and around Main Street. Later some were housed in barracks built on the hill-crest, but until 1869, when the last imperial troops left Napier, many continued to live in small cottages and tents in Main Street.

Remnants of that first wave of settlement in Main Street are still there today, including wells that were dug for water supply and a few of the cottages. However, although Main Street still runs up a steep gully, Onepoto is now no longer on the shore of the inner harbour. Renamed by European settlers as Corunna Bay, the little beach was drained by the Hawke's Bay earthquake in 1931 along with the rest of Te Whanganui-a-Orotu, as the land in that area rose by up to 2 metres. 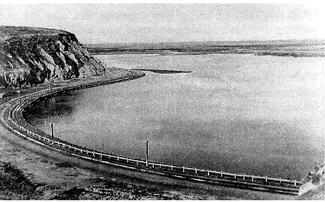 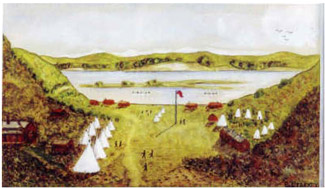 A painting of Onepoto Valley drawn between 1858 and 1861 by Lieutenant Henry Stratton Bates, of the 65th Regiment, whose house would be one of those shown in the picture. Image: Hawke's Bay Cultural Trust 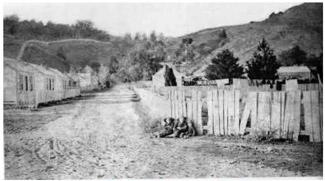 Looking up Main Street.
This photograph was probably taken in the 1870s.
Photograph: Don Wilkie Collection 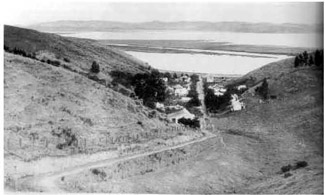 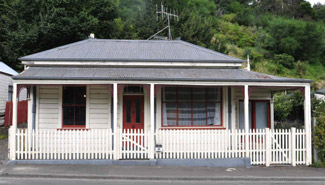 A few months later Alfred Sutton drowned while bathing in the river nearby. Mary Sutton ran the store until 1911 when she sold to August and Selina Everaerd The store was run by August until his death in1928, and his widow, Selina lived at 15 Main Street until she sold the property in 1949.

Since that time 15 Main Street has been a family home, but the display window for the store can stillbe seen in the photograph above on the right of the front door and a stable and storage building still remain behind the house.

The Woollen Mills
On 7 March 1902, a large paddock previoulsy used for grazing stock by a Main Street resident was bought by a cooperative of Hawke's Bay sheepfarmers callling themselves the Hawke’s Bay Woollen Manufacturing Company Limited, A brick building was constructed with clay dug from the site and processed at a brick kiln just round the corner from the Onepoto Gully. At first the woollen mill did well and the original building was extended in 1904. But the owner cooperative was liquidated in 1908 and ownership passed to Richard Jamieson, a Dunedin woollen warehouseman and, within two years Jamieson’s company had sold out to the Napier Woollen Company. In 1920 this company changed its name to the Napier Woollen Mills Ltd, and a thriving business operated under this name for over 40 years, closing in 1967. 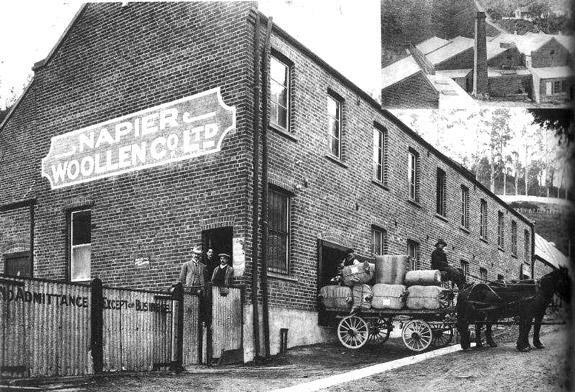 The woollen mills building in Main Street. Because of the name used by the company for their sign on the building, this photograph can be dated to between 1910 and 1920. The man in the suit and hat in front of the building is likely to be Managing Director, Hugh Chisholm. Don Wilkie Collection

From its establishment the mill generated its own power. Wool was scoured on site. There are numerous advertisements for goods produced at the mill – blankets, flannel goods, rugs, mauds (a Scottish name for a plaid travelling rug), socks, stockings, bloomers, pants, and jerseys were all manufactured here. A number of tradenames were used including Pania, which, after the statue of Pania became part of the Marine Parade gardens in Napier, included a depiction of this as part of the Pania logo.

The mill was an important industry in Napier and a number of men living in Main Street were employed there. After the 1931 Hawke’s Bay earthquake part of the original building was demolished and rebuilt. When production ceased in 1967 the site was purchased by the United Empire Property Company Ltd (UEB Carpets).

In 1973 The Kane Carding Company was set up by Frits and Anne Vink. carding wool for the many craftspeople who were then becoming interested in reviving the craft of spinning with the traditional domestic treadle wheels and weaving with hand looms.
The Vinks’ lived on site at the mill and worked seven days a week inthe business, which operated three of the original carding machines that had been purchased for the mill in the 1900s. By 1995, when the company ceased to operate, they were supplying both the export and local market.

Since that time a restaurant and function centre has been established by the Vinks at the mill site.

A history of the Onepoto Gully/ Main Street area is depicted on an interpretive sign board erected at the foot of Main Street in 2011 by the Historic Places Hawke's Bay Branch Committee. Photograph: Ivan Hughes