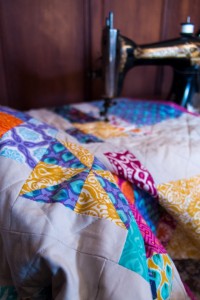 Some of the modern quilts which will be on display at Highwic.

"A new take on a traditional art form will be displayed at Highwic, the NZ Historic Places Trust property in Newmarket, from mid-September."

A new take on a traditional art form will be displayed at Highwic, the NZ Historic Places Trust property in Newmarket, from mid-September.

The Point Chevalier Monday Modern Quilt Group will showcase a range of their stunning pieces in an exhibition New Quilts for Old Beds running from September 18 through to September 29 (NB Highwic closed Mondays and Tuesdays).

“The exhibition will feature some striking examples of modern quilts from some very skilled craftspeople whose work reinterprets traditional quilting ideas with fresh modern fabrics and new designs,” says the Manager of Highwic, Cheryl Laurie.

“It will be a wonderful celebration of modern quilting.” 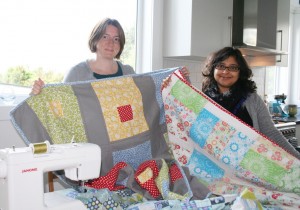 According to Melanie Hastings of the Point Chevalier Monday Modern Quilt Group there are some general features that set modern quilts apart from the more traditional styles.

“These often include the use of bold colours and prints, high contrast and graphic areas of solid colour, improvisational piecing, deliberate imperfections or inconsistencies and minimalism – to name only a few,” says Melanie, who is helping to coordinate the exhibition.

Modern traditionalism – or the ‘updating’ of classic quilt designs – is also often seen in modern quilting.  We hope that our quilts reflect a new aesthetic that both non-quilters and quilters –modern and traditional – can appreciate.

Modern quilting appears to be at the forefront of a whole new generation of interest in the art of quilt making according to Melanie.

“At one point quilting looked like being one of the ‘traditional’ skills in danger of dying out.  But like many crafts there has been a resurgence of interest in it.”

Today’s modern quilters, however, most likely did not grow up immersed in the culture of quilting, and probably don’t have a cupboard of vintage quilts made by their mothers, grandmothers or great-grandmothers.

“New quilters may not know anyone else who quilts – and so for the modern quilter often social networking becomes important.  Today many, perhaps most, modern quilters will draw inspiration, motivation and enthusiasm from blogs and web communities like Flickr and Pinterest,” she says.

“Interestingly, despite often solitary beginnings, due to the resurgence of interest in the craft, quilters are now finding that modern quilt guilds and informal groups are thriving, giving us a ‘real life’ outlet for our interest too.”

Modern quilters owe much to traditional quilters – but also relish the chance to make a bold statement in whichever way they choose.  The exhibition at Highwic will showcase some wonderful examples of this new approach.

Caption: Some of the modern quilts which will be on display at Highwic.