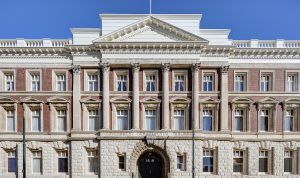 Heritage Christchurch has been announced a finalist in the Canterbury Heritage Awards in the tourism category.

The awards honour Canterbury individuals, organisations and companies involved in heritage restoration, retention, promotion or tourism. The biennial awards were first held in 2010 and have since evolved to reflect the changing heritage landscape of Christchurch, post the 22 February 2011 earthquake.

“We are very grateful for the recognition of our hotel in these prestigious awards. Every entrant knows the challenges faced to reprise and maintain a heritage building post 2011. We applaud all our fellow finalists in the awards and look forward to the outcome on 15 June,” says Gary Jarvis of Heritage Hotels.

The winners will be announced at a special awards ceremony event at the Isaac Theatre Royal on Friday 15 June 2018.

Heritage Christchurch is set in the 104-year-old government building (OGB) on Cathedral Square. The hotel offers elegant suites in one, two and three bedroom configurations as well as a health club, lap pool and sauna on site.

The building was designed by renowned architect, Joseph Clarkson Maddison, in an Italian Renaissance Palazzo style. It opened in August 1913 and is considered of ‘monumental’ importance to the city by architecture experts.

For bookings and information email www.heritagehotels.co.nz/hotels/heritage-christchurch