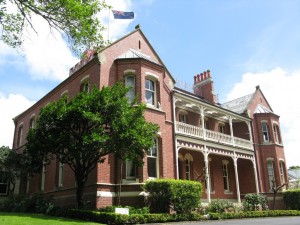 "The historic importance of a Ponsonby landmark has been recognised by the country’s lead heritage agency.

The NZ Historic Places Trust recently registered Bishop’s House as a Category 1 historic place, identifying it as a place of outstanding heritage significance."

Media Release is as follows:

The historic importance of a Ponsonby landmark has been recognised by the country’s lead heritage agency.

The NZ Historic Places Trust recently registered Bishop’s House as a Category 1 historic place, identifying it as a place of outstanding heritage significance.

“Besides its commanding presence, the brick building – which has served as the Catholic Bishop of Auckland’s residence for almost 120 years – has significant architectural claim to fame. Its design was heavily influenced by Augustus Pugin – one of the ‘Godfathers’ of the Gothic Revival style of architecture that swept Britain and many other parts of the world in the 19th Century,” says the NZHPT’s Heritage Adviser Registration, Martin Jones.

“The famous architect’s son, Peter Paul Pugin, designed the Bishop’s House, drawing inspiration from The Grange in Ramsgate, which had been created by his father Augustus as his own home. The Bishop’s House is a rare 19th Century example of a Catholic Bishop’s residence and, as a Peter Paul Pugin design, likely to be unique in New Zealand.”

Bishop Luck’s father had bought the Grange in Ramsgate, and so the bishop was well acquainted with the Gothic residence. It seems that he was keen to capture some of the Grange’s architectural style and presence in the new Bishop’s house.

The imposing building was commissioned by Bishop Luck, who raised funds during a tour of Europe in 1891-2 to construct the large brick residence.

“The foundation stone for the building was laid in May 1893, and Bishop Luck took possession on Easter Sunday almost a year later,” says Martin.

“Perhaps one of the most striking features of the Bishop’s House is the high, crenelated tower which provides a stunning view of the Mount St Mary and Freemans Bay areas as well as the Waitemata harbour. The Grange also has a similar tower, and this was clearly carried over into the design of the new house.”

The Bishop’s house broke new ground with a number of other features – including a series of state-of-the-art gas burners that were fitted, complete with patent electrical mechanisms for lighting and extinguishing gas lamps with each alternate pull of an attached chain. The hardware was bought by Bishop Luck himself as he passed through the United States, and was believed to be the only example of its kind in Australasia at the time.

Another example of innovation is the freestanding ‘Unitas’ toilet, initially designed by Thomas William Twyford of Staffordshire as one of the first ceramic one-piece wash-out pedestal closets to be produced. Advanced for its time, the practical one-piece design helped make the exposed pedestal toilet – now bog-standard in every home – acceptable.

The building also incorporates the first experimental use of Matamata stone (Hinuera Ignimbrite) in New Zealand.

“A Victorian naval telescope which, according to contemporary accounts Bishop Luck used to observe daily activity from his high vantage point, is still part of the house’s chattels,” says Martin.

As well as being the official residence for Auckland’s Catholic Bishops, under Bishop Cleary the Bishop’s House also served as the headquarters for two influential Catholic publications – The Month and Zealandia.

Today, the Bishop’s House is now linked by two glazed cloisters to the Pompallier Diocesan Centre – the administrative headquarters of the Auckland Catholic Diocese, which was completed and opened in 1989.

“The Bishop’s House forms the centrepiece of a significant ecclesiastical complex at Mount St Mary in Ponsonby, which has served as the headquarters for the Catholic faith in Auckland since the 1850s,” says Martin.

“The house continues to be used as a Bishop’s residence, a tradition first established on the site by Bishop Jean-Baptiste Pompallier whose more modest wooden house was relocated a small distance to St Marys Road when the current building was erected, and which was registered as a Category 1 historic place by the NZHPT last year.”