The following is a copy of a letter sent by Peter Dowell (Heritage Building Developer and Historic Places Aotearoa Board Member) where he outlines the arguments for changes to the tax code to aid the retention of our built heritage.

Comment:
We thank Peter Dowell for making this letter available. We think it is important that Heritage Advocates/Activists have an understanding of the issues being faced by heritage building owners. In email correspondence with us, Peter states he has had no formal response to his letter. (This includes the New Zealand Historic Places Trust.)
We will keep you posted on any developments.

Where to from here?

We consider that government should revisit its depreciation policy for strengthening of EQP heritage buildings. We will be pleased to discuss further in person if required.

We thank you for your consideration and look forward to your response/s. 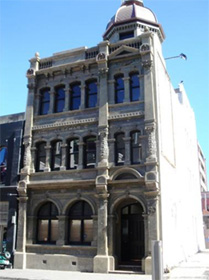 The Albermarle Building, located at 59 Ghuznee St, Wellington, is a Category II Heritage Building.  It requires full earthquake strengthening to bring it up to current code requirements.

The WCC has sent a notice to the owner requesting information as to the owner’s intention: is it to strengthen or demolish the building within the next 2 years? Obviously given that it is a Category II building demolition is NOT an option.

If able to expense Earthquake Strengthening, the tax benefit  to the owner is $120,000 (one off) based on 30% of expenditure

On completion for Earthquake Strengthening & refurbishment

The White Hart Hotel is Cat I Heritage Building that forms an important part of the New Plymouth Streetscape. The Building has suffered greatly from the elements of time and the current owners have been trying to work through numerous proposals (over the last 8 years)  to restore the Heritage architecture of the building. Given the sheer size of the building and costs involved in the restoration project it has proven difficult to be able to make the numbers work and produce an economic return for its owners.

If able to expense the restoration costs to retain the Heritage values/fabric, the tax benefit to the owner is $150,000 (one off) based on 30% of expenditure. This could replace the Heritage Grant provided by the NZHPT.

On completion of the Restoration work and additional building works