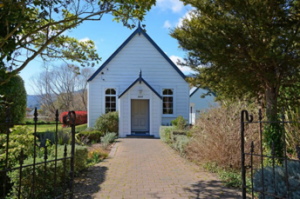 Built by the local Presbyterian community in 1893, the Wallaceville Church is a well-known feature of the scenic Whiteman’s Valley area of Upper Hutt. According to the booklet “One Hundred Years of Worship”, the church, which seats 108, was built by Mr Whitcher of Petone for the princely sum of ninety seven pounds.

Back in 1893 it was intended the church should be the hub of the surrounding area. By 1983 it was clear this was no longer the case and the church eventually passed into private ownership in 2002. 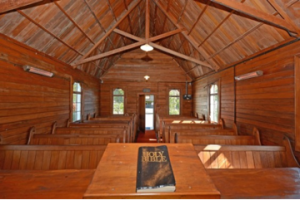 Since then the church has been well maintained and operated as a venue for wedding and other life celebration ceremonies. It remains virtually unchanged from when it was first constructed. Even the iron gates depicted in the photograph above are said to original.

Despite being an important part of Upper Hutt’s early heritage and a well preserved example of late 19th century country church architecture, the church is neither listed on the NZHPT Register or as a heritage building on the Upper Hutt City Council District Plan.

In October 2013 the church, along with its surrounding acre of land, was put up for sale. While it is hoped any new owners will continue to maintain the church in its current condition and operate it as a wedding venue, its lack of official heritage protection leaves the church vulnerable to a more uncertain future. At present there is little to stop the church being modified into a residential dwelling, moved off site or even totally demolished.