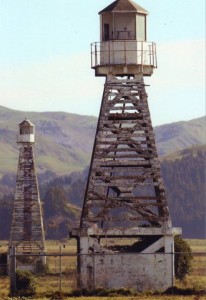 The Beacons are a prominent landmark near the foreshore between Napier and Bay View. They were erected in what was then part of the Inner Harbour in 1907 by the then Napier Harbour Board, to serve as leading lights guiding shipping into the Port of Napier through the channel at the south end of the Pania Reef.   The reef is fully submerged and extends from about 500 metres off the Port north east for about 1.6Km

Before The Beacons were erected the Admiralty Trees were planted in 1878 as a navigation aid, and these bluegums (Eucalyptus Regnans) are still standing and can be seen on the skyline to the west on a line through the Beacons at an elevation of 325 metres. At a distance the group of five trees that remain of the original 16, look like a single tree.

Farmer, John Giblin, planted the original trees on his property, Awanui, and, although they have long been referred to as the Admiralty Trees, the origin of this name is unclear, as no official reference has been located. 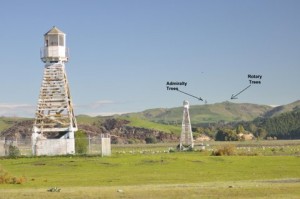 The Beacon and the Trees (Image Ivan Hughes)

In 1989 a new grove of gums was planted on the same ridge about 200 metres to the north and these are also now visible from the coastline or inland from Glengarry Road. This planting was a project of the Rotary Club of Ahuriri, under the leadership of a former vice-president of the club and retired Harbourmaster, Captain George Gunn, and with the participation of Phillip Giblin, grandson of John, who had planted the first gums over a century previously. Captain Gunn was concerned that the original aging trees would eventually die and the tradition of the Admiralty Trees would be lost.

The Beacons were the first light towers in New Zealand to be constructed from reinforced concrete, and were built by the Ferro Concrete Company from Australia. The seaward beacon is 14.3 metres high and was sited on the coastal shingle bank and the inland beacon (19.8 metres) was placed on a small island in the Inner Harbour 330 metres to the west. Lighting was originally supplied by Matthews incandescent oil burners which were serviced by a lighthouse keeper who lived nearby, at the Petane Domain. The system was electrified in 1913 using 500watt lamps and the higher inland beacon was fitted with a red lamp that could be seen above the white light on the seaward tower.  The overhead power cable between the towers sagged so low that it could cause an obstruction to yachts sailing on the Inner Harbour.

The earthquake tilted the rear leading light beacon which stood on an island in the Ahuriri Lagoon.The forward beacon stood on the shore (Image sourced N.Z. Herald)

The Hawke’s Bay earthquake on 3 February 1931, damaged the inland tower leaving it with a lean of 25o. Repairs were carried out by the original builder, the Ferro Concrete Co.

The Beacons were taken out of service in December 1975 although a green neon light remained on the seaward tower until 2006. The Beacons were replaced by a far more sophisticated New Zealand-made Vega light on a 15m tower situated nearby, adjacent to the intersection of State Highway 2 and Turfrey Road, between Napier and Bay View. The new light transmits a single high-intensity beam that changes colour either side of the centre line of the beam. 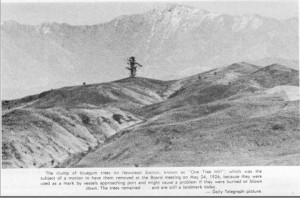 During their history both The Beacons and the Admiralty Trees have survived official attempts to remove them. In 1926 a motion was tabled at a meeting of the Napier Harbour Board that the trees be removed on the grounds that “confusion, danger or calamity” could arise for shipping if the trees were suddenly burnt or blown down. The motion was lost. During the 1970s the demolition of The Beacons was proposed as a training exercise for army engineers from Linton Military Camp. At the last minute officialdom realised that the demolition had not been gazetted and The Beacons were saved! 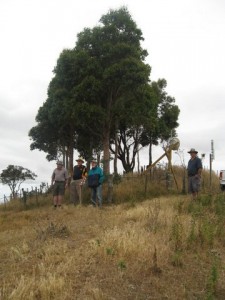 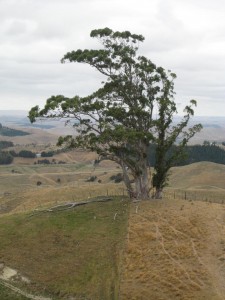 The Seaward Beacon from The Esplanade, Westshore (Image Ivan Hughes) 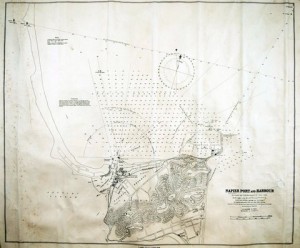