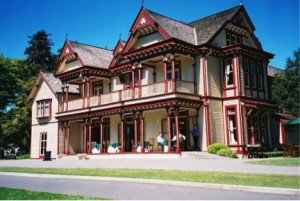 The following is the text of the CHRISTCHURCH CITY PLAN – LISTED HERITAGE ITEM AND SETTING HERITAGE ASSESSMENT – STATEMENT OF SIGNIFICANCE that accompanied the Staff Report.

Historical and social values that demonstrate or are associated with: a particular person, group, organisation, institution, event, phase or activity; the continuity and/or change of a phase or activity; social, historical, traditional, economic, political or other patterns.

Riccarton House is of historical and social significance as the former Deans' family homestead. The Deans' were the first permanent European settlers on the Canterbury Plains, built the first European dwelling on the Plains, and played an important role in the development of the Canterbury region. The area is also historically significant as a Ngai Tuahuriri mahinga kai settlement and timber source from the 1800s and was part of a wider landscape of trails and settlements which reflect the Maori way of life prior to European settlement. The dwelling is associated with European land purchase from Maori. The Deans family initially leased the land from local Maori and after the Crown purchase of Ngai Tahu land, and the survey of Christchurch, they purchased 400 acres for their farm, including half of the remaining bush. The dwelling is associated with interaction between Maori and Europeans. The Maori connection with the area (and natural features of the bush) is reflected in the Maori names of neighbouring streets including: Rimu, Kotare, Ngahere Streets.

Cultural and spiritual values that demonstrate or are associated with the distinctive characteristics of a way of life, philosophy, tradition, religion, or other belief, including: the symbolic or commemorative value of the place; significance to Tangata Whenua; and/or associations with an identifiable group and esteemed by this group for its cultural values.

The homestead is of cultural significance as it charts the growing prosperity and changing needs of the Deans family. The current public access to the building allows for greater community involvement in the interpretation and preservation of the homestead. The house is in an area with cultural significance to Maori, for its history of occupation and activity by Maori prior to and during part of the Deans' occupation The homestead is of cultural significance to the region for its long association (1843-1947) with William and John Deans, Scottish émigrés, and their family and descendants. The Deans had a formative influence on the development of the City and the Region. They named their farm Riccarton and the river Avon, after the parish and a stream in their homeland, which reflects their cultural ties to their homeland. The former Deans estate (Deans cottage, Riccarton House and grounds) was purchased in 1947 by the Riccarton Bush Trust with financial assistance from local councils, including the Christchurch City Council

Architectural and aesthetic values that demonstrate or are associated with design values, form, scale, colour, texture and material of the place. The homestead is of architectural and aesthetic significance for its construction in three stages by different local architects and builders. The dominant architectural character of the house was established with the 1900 section design by Robert England, one of the City's premier domestic architects. England also designed McLean's Mansion and Fitzroy. James Johnson was responsible for the first stage of the dwelling in 1856 and Mr Marley was responsible for the second stage in 1874. The first two stages of the dwelling are in the Victorian Vernacular style, with simple forms and a low level of detailing, and the 1900 section is in the High Victorian Eastlake style, with more complex architectural forms and a high degree of ornamentation. The homestead is a two storey dwelling with multiple gabled roof forms, bracketted eaves, sash windows and french doors. A double height verandah features on the principal elevation. Significant interior features include the oak panelled entrance hall, ornate timber fire surrounds, and a timber stairwell and balustrade with acorn newell posts. Some original wall paper has been uncovered. The homestead underwent restoration work in 1994, including new roofing shingles and interior renovation.

Technological and craftsmanship values that demonstrate or are associated with: the nature and use of materials, finishes and/or technological or constructional methods which were innovative, or of notable quality for the period.

The homestead is of technological and craftsmanship significance for its construction, and its interior detailing of high quality. The shingle roofing, brick chimneys and timber panelling all show a high degree of craftmanship skill for the periods, and illustrate past techniques and us of materials. The Oak panelled entrance hall is of particular interest for its quality of timber. The ornate timber fire surrounds, and a timber stairwell and balustrade with acorn newell posts also evidence craftsmanship design and skill of the period.

The homestead is of contextual significance as it is part of a wider landscape which once formed part of the Deans' estate, and which contains tangible features that evidence the Deans' activities and occupation of the site. These include Deans' Cottage, the landscaped grounds of the homestead, the site of the Deans' early timber dwelling and farm buildings, the original site of Deans' Cottage, the Deans' brick farm steading (now Christchurch Boys' High School classrooms, two brick bridges across the Avon River, and part of the Deans' sheep grazing paddocks (now the Christchurch Boys' High School playgrounds. The homestead is consistent in terms of material and in the detailing of its earliest sections with the nearby Deans' Cottage. The homestead is of landmark significance as a well known Canterbury dwelling and grounds, and for its association with Riccarton Bush and the Christchurch Boys' High School. Although the dwelling is not visible from the street, it is signalled by a treelined driveway, extensive grounds and a large sign.

Archaeological values that demonstrate or are associated with: potential to provide archaeological information through physical evidence; an understanding about social historical, cultural, spiritual, technological or other values or past events, activities, people or phases.

The homestead is of archaeological significance for its potential to provide evidence of human activity including early construction techniques, and activity which pre dates 1900 as the first stage of the house dates from 1856, and the Deans' were active on the site from 1843. Food gathering, temporary occupation and other activity by Maori in this area - Putaringamoutu - is also documented prior to and during the Deans' settlement.

Riccarton House is of national heritage significance. The building has been assessed as having heritage value beyond the Canterbury region and is primarily of importance to the national community for its heritage values.

Riccarton House is of historical and social significance to the nation for its connection with the first permanent European settlers and successful farmers on the Canterbury Plains, in the area which was to become Christchurch one of the Country's major centres. It is also of historical and social significance for its association with the interactions between European and Maori on the Deans Estate. The house is of contextual significance at a national level as part of the cultural landscape of the former Deans Estate which includes Dean's Cottage, Riccarton House Grounds, Riccarton Bush, the former Dean's farm buildings and the site of the first European building on the Canterbury Plains. Riccarton House is of regional architectural and aesthetic significance for its sequential construction by different designers at different times which is reflected in the different styles of each stage. The 1900 Robert England designed stage of the house is of regional significance for its High Victorian detailing. The house is of technological and craftsmanship because it evidences construction techniques and materials of three periods in the region's development, and showcases the skills of the periods, in particular a high level of skill in terms of the interior woodwork of the stairwell and entrance hall. The house is of historical and cultural significance to Maori for its location in the seasonal migration and food gathering area 'Putaringamoutu'.

PLEASE NOTE THIS ASSESSMENT IS BASED ON INFORMATION AVAILABLE AT THE TIME OF WRITING. DUE TO THE ONGOING NATURE OF HERITAGE RESEARCH, FUTURE REASSESSMENT OF THIS HERITAGE ITEM MAY BE NECESSARY TO REFLECT ANY CHANGES IN KNOWLEDGE AND UNDERSTANDING OF ITS HERITAGE SIGNIFICANCE.

PLEASE USE IN CONJUNCTION WITH THE CCC HERITAGE FILES.