Isaac Theatre Royal Chief Executive Neil Cox has generously provided us with the text of "THE RECONSTRUCTION OF THE ISAAC THEATRE ROYAL PROJECT UPDATE - MAY 2013".

THE THEATRE ROYAL CHARITABLE FOUNDATION ARE CURRENTLY IN THE PROCESS OF RAISING THE ADDITIONAL $8 MILLION REQUIRED TO FULLY COMPLETE THE REBUILD PROGRAMME TO REOPEN IN JUNE 2014.

YOUR SUPPORT TO HELP US ACHIEVE THIS GOAL IS APPRECIATED.

The timeline for the reconstruction of the ITR including improvements targets completion and reopening to the public by mid-June 2014. The project is significantly more extensive in design and complexity of construction than originally estimated. The Isaac Theatre Royal is essentially being rebuilt from Façade to Proscenium Arch. Our target for reopening is achievable but does not come without significant challenges and extensive cost in such an intricate rebuild. We have a high-profile project team at our disposal for research, design, construction, heritage, technical and project management for this important repair programme for the city of Christchurch and are confident the timelines are achievable.

There have also been many kind and significant personal donations from Flight of the Conchords, as well as actors Richard O’Brien and Miriam Margolyes, amongst others.

THE THEATRE ROYAL CHARITABLE FOUNDATION ARE CURRENTLY IN THE PROCESS OF RAISING THE ADDITIONAL $8 MILLION REQUIRED TO FULLY COMPLETE THE REBUILD PROGRAMME TO REOPEN IN JUNE 2014.
YOUR SUPPORT TO HELP US ACHIEVE THIS GOAL IS APPRECIATED.

The ITR is the chosen home for Royal NZ Ballet, NZ National Opera, Showbiz Christchurch, The Christchurch Arts Festival, Southern Ballet Trust, NZ Comedy Festival, CPIT Ignition and numerous International touring shows. The new technical enhancements will also allow the Theatre to provide a temporary home for Christchurch Symphony Orchestra, NZ Chamber Music, the NZSO and hopefully the NZ Film Festival. The ITR has been perennial supporters of the majority of local arts community organisations and will continue to provide affordable rates for the local community in the future.

The Isaac Theatre Royal (ITR) was subjected to severe shaking during the earthquakes of 22 February and 13 June 2011 and sustained considerable damage; this damage was exacerbated by the constant aftershocks and subsequent significant earthquake of 23 December 2011. The Back of House, which was built in 2004/05, suffered only moderate damage and will be repaired, but the 1908 auditorium and 1928 foyer space was not considered repairable in its original form, due to the dangerous nature of the unreinforced masonry walls. It is noteworthy that the structural strengthening carried out in 1999/2000 prevented complete collapse of the theatre and enabled the retrieval of key heritage items and stabilisation of the Edwardian heritage façade, which will be retained.

Developed Design is now complete for the rebuild and consent for the building of the Super Structure has been granted. Foundations have been completed. The design will achieve 100% of new code with the original style and finesse of our “Grand Old Lady” being maintained throughout but with various technical and design enhancements necessary to provide Christchurch with a world class theatrical experience in the strongest and safest performance venue in New Zealand.

The stage, side stage and dressing rooms also sustained damage albeit to a far lesser extent due to the fact they were built in 2004/05 to much higher standards of earthquake resistance. 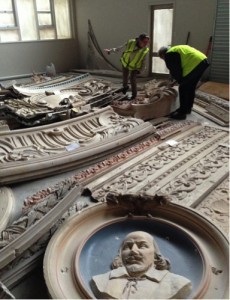 The ITR has appointed RCP (Project Managers), Naylor Love (Construction) and a team of engineers including Holmes Consulting Group (Structural), Powell Fenwick (Mechanical & Fire), Warren & Mahoney (Architectural), Tony Ussher (Heritage), Neil Pritchard (Electrical) and Rawlinson’s (QS) plus a team of specific experts in technical, egress and accessibility design for the rebuild/repair works. The reconstruction will need to comply with current, more stringent building standards with respect to increased earthquake resistance, fire protection, egress and accessibility. The heritage aspect of the ITR is extremely important to the city and where possible the team is working with NZ Historic Places Trust and Christchurch City Council’s Heritage Team to either preserve or faithfully replicate the interior heritage fabric so that the historic venue will look substantially the same as it did before 2011.

In conjunction with the repair works, the team is also working on a number of improvements to the services and amenities of the ITR, including: