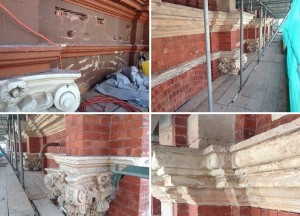 The Isaac Theatre Royal Chief Exec  Neil Cox has generously allowed us to print the following extracts of the ITR Newsletter.

Behind the green netting on Gloucester Street the Façade’s original bare-brick colours have been revealed for the first time since the early 1920’s. Six coats of paint from the years that followed have now been stripped back to reveal the pure red oxide colours of one of the few heritage façades still standing in the Christchurch CBD. We still have a few challenges ahead with the Oamaru stone as a lot of it has been very weather-worn over the years, but this is a sneak-peak behind the netting – a vision of over 100 years ago. 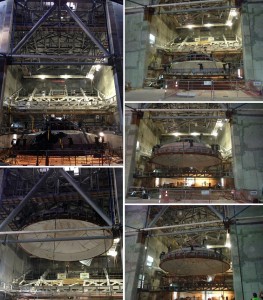 Our World Famous dome is home

The Dome is back in its rightful place! This is a massive milestone for the team and a turning point for the project! The last year of construction has given the theatre a backbone and has provided a fantastic show of giant cranes, tricky piling, sprayed concrete and chunky steel, but now we move away from the severity of pure construction and into the finesse and grace period, as we now start to dress our Grand Old Lady.