The Christchurch Earthquakes are impacting on heritage all overNew Zealand, and particularly in areas which experience earthquakes. Hawke’s Bay, being the site of New Zealand’s most devastating quake, in terms of lives lost, is no exception, although buildings here have either survived the Richter 7.8 shake of 1931 or been built since then.
NAPIER
The focus of activity is in the south-east corner of the Central Business District, where three buildings which survived the 1931 earthquake are now deemed to be earthquake risks. Of the three, only the Post Office building is registered by the NZ Historic Places Trust and is within the Art Deco Quarter. 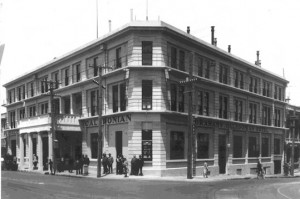 Demolition has just been completed of the former Caledonian Hotel (above, when new), Napier’s first ferro-concrete building, built in 1907. It was subsequently known as the Holiday Hotel, then the Commercial Hotel, until the early 1950s when it was converted to offices and became the Commercial Building. In the 1990s the upper floors were converted into apartments. It was a major landmark in the city and will be missed. The demolition process revealed serious structural deficiencies, including

floor slabs with no visible means of support, and the building had to be temporarily strengthened during the demolition to prevent its collapse. It will be replaced by a one-and-a-half storeyed retail building.

The demolition has revealed the north wall of the building housing the Kilim Café.This must surely be the oldest building in Napier’s business district. Before it was given a Spanish-style facade, around 2000, it was a simple wooden building without a veranda, which clearly escaped the postearthquake fires, probably because it was shielded by the massive concrete hotel. Its north wall disappeared from view in 1907 when the hotel was built and was over-flashed to prevent gradrain seeping down between the two buildings. It has now been revealed, its unpainted wooden weatherboards shrunken and warped with age. 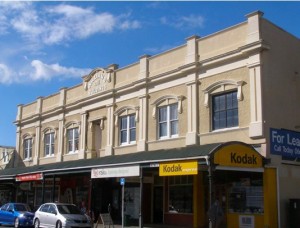 Opposite, the reinforced concrete Williams Building of 1911 (above) will soon be demolished. It is the only building in Napier still with the cast-iron posts which supported the verandas in pre -quake times. During the post-earthquake reconstruction, all buildings were required to have verandas supported from above. It will be replaced by a single storeyed retail block. Both of these two buildings are outside Napier’s Art Deco Quarter and were not registered by the NZ Historic Places Trust. 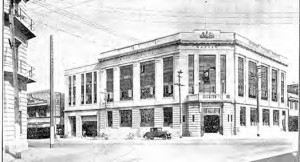 In the same area, the former Post Office (above, when new) is to be strengthened and adapted for retail and office use, creating more shops in Hastings and Dickens Streets. Its survival is a great relief as it is a landmark and has an interesting history. It’s said that if there had been one bucket of water in the building after the earthquake, the fire which started there could have been put out. Built just before the earthquake, in 1930, it replaced an earlier Post Office at the corner of Browning Street and Shakespeare Road. The Post Office was the first business to relocate south from the north end of Hastings Street, which had once been Napier’s main shopping street but by the 1920s was being superseded by Emerson Street. The earthquake provided the opportunity for three other businesses to move to Emerson Street – the Bank of New Zealand, Hannah’s Shoe Store and Lockyer’s Radio Shop. 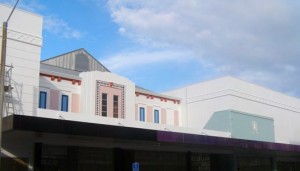 Opposite the Post Office, the new Farmers Department Store (above) opened in June. It incorporates the facades of the Callinicos Building and the former Odeon Cinema, originally named the Plaza. The zigzag frieze on the new building replicates the frieze on the Marine Parade end of the cinema, and the impressive leadlight window from the rear of the Callinicos Milkbar is a stunning feature of the Hastings Street show windows. The former Farmers store, originally Blythes Department Store, occupied two connected buildings facing Emerson Street and Hastings Street. After the demise of Blythes, the department store expanded into the McGruer’s Building, originally a smaller department store. These three buildings are all being strengthened and converted into smaller shops. 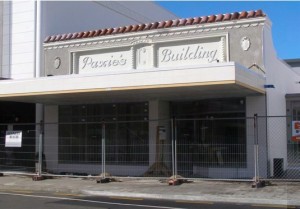 Close by, Paxie’s Building of 1932 (above) is being redeveloped. The original Spanish Mission façade has just been restored, and new shops are being constructed through to the Marine Parade, some of them facing a walkway that will link Hastings Street and the Marine Parade and be known as Paxie’s Lane. 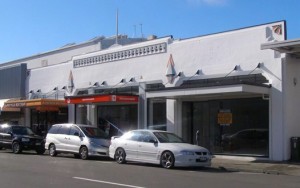 In Dalton Street, the Art Deco facade of the Chisholm Building (above) has been hidden for many years by a massive awning and cladding. It has just been strengthened and restored. And the strengthening of several other smaller buildings is either being carried out or planned.

There are other heritage happenings in Napier: 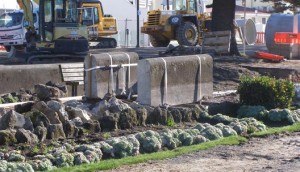 To prevent the flooding in the CBD, an intermittent problem in recent years after the periods of intense rainfall which seem to be happening more frequently than in the past, a massive new drain, 2 metres in diameter, has been laid across the Marine Parade. It will be extended in two further stages along Hastings Street and the length of Tennyson Street. It has involved digging a six-metre-deep trench across the Marine Parade gardens and temporarily removing a length of the 1890 sea wall. This stage has only just been completed. The sections which were removed have been replaced and the joints where it was cut through are hardly visible. A viewing hole has been created so that the stonework base of the concrete wall can be seen. Although the wall now appears to be only a metre high, it is actually much higher than that, because it was originally a retaining wall, supporting the roadway and about three metres high on the seaward side. At intervals, steps led down to the beach, the level of which gradually built up after its construction because of building up of shingle during heavy seas. 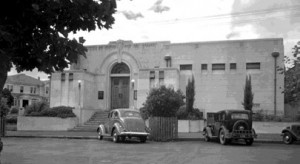 In the north-east corner of the Art Deco Quarter, the extensions to the Museum (renamed MTG Hawke’s Bay) have just been completed and will open to the public in late September, when the collections have been moved back in and 14 new exhibitions have been mounted. 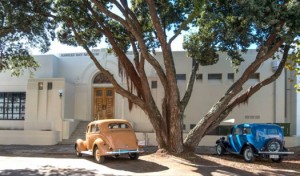 Of particular interest is the restoration of the original entrance which was converted to a loading dock in 1977 when the Century Theatre was built. It will now provide a separate entrance to the enlarged Archives Department of the Museum. 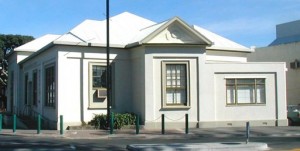 In Byron Street, the former Borough Council Chambers of 1884, moved from its original site to make way for the Museum expansion, will soon become a Community Arts Centre. Historic Places Hawke’s Bay has written a letter of support for the fund-raising appeal. This building, designed by Robert Lamb and built in 1884, was remodelled in 1950 when Napier became a city. After its replacement by the current City Council building in the early 1960s, it filled a number of roles, its most recent one being an Education Centre for the Museum. Perhaps one day its Victorian exterior
can be restored.

These notes are adapted from a report in ‘Newest City News’, the magazine of the Art Deco Trust.
(This article is an extract from the HB Heritage News August 2013.)