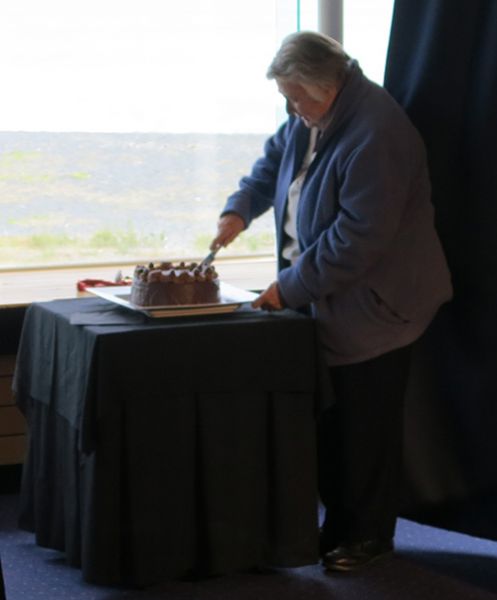 Cutting of the Cake.

Guest speakers Anna Crighton of Christchurch and James Blackburne of Gisborne provided two different personal insights into what earthquakes have done to their respective cities. Ms Crighton brought gasps of horror from the audience as she described the devastation in the kitchen in her own Christchurch home as a heavy tank full of water descended through the roof to land beside where she was standing, then showed a series of empty Christchurch sites where important heritage buildings have been demolished in the wake of the quakes. Mr Blackburne, an architect and member of the Historic Places Aotearoa Executive, showed inspiring images of the restoration carried out by his firm on a number of buildings badly cracked and damaged in the Gisborne quake of 2007.

Ms Crighton, who is President of Historic Places Aotearoa, also outlined the structure of the new heritage organisation that the Hawke’s Bay group has joined, as part of the proposed nationwide federation of independent local heritage advocacy societies. Denis Pilkington, who is the Chairperson of the newly established Historic Places Hawke’s Bay, briefly outlined the aims of the local society which include research on sites of heritage significance leading to publications and installation of plaques or signboards, recording information about important local heritage sites so that they are listed in the district schemes of local authorities and by the New Zealand Historic Places Trust, field trips and other activities for members, and an active role in speaking out on local heritage issues.

Both Hastings District Mayor, Lawrence Yule, and Napier Mayor, Barbara Arnott, were present at the Sunday function, and in officially launching Historic Places Hawke’s Bay, Mrs Arnott acknowledged the vital importance of the work that the local committee has done over the years, and emphasised the essential role of local input to ensure that heritage advocacy is effective.

The 50 people who attended the launch also had the opportunity during the afternoon to take a leisurely guided walk round some of central Napier’s heritage buildings that are today performing useful roles that may be quite different from the purpose for which they were originally built.

Further information can be obtained from Denis Pilkington, phone 8356525.