“Heritage Christchurch’s restoration has been a labour of love and I am personally delighted it has worn the test of time and seismic events to remain a vital part of Christchurch’s priceless heritage,” says Gary Jarvis. (Group Operations manager for Heritage Hotel Management)
The Media Release is as follows: 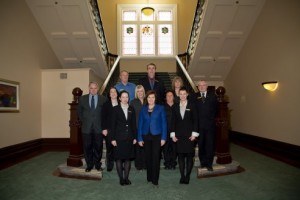 The enthusiastic hotel opening host team includes some familiar faces and some new ones too, all with huge smiles at the prospect of working in this much admired, stunning historic property.

Heading the opening team is Vicki Bretherton, who rejoined the Heritage Hotel Group as general manager of Heritage Hanmer Springs a year ago, having previously been the GM of Heritage Queenstown.

"I am absolutely delighted to be back in Christchurch in Cathedral Square, the heart of Canterbury. Like many of the team here, I feel very privileged to welcome guests to such an elegant building of great historic significance and be part of the rebuild and future of this great city,” says Vicki Bretherton.

Almost all the hotel staff are Cantabrians, including Sarah McIvor, front office duty manager who having left for Australia after the February 2011 earthquake, returned when she heard the Christchurch CBD was reopening.

“The reason I returned to Christchurch was to be part of the rebuild. When I heard the CBD was opening I dropped everything and got on the first plane back from Australia. Becoming part of the team reopening this amazing hotel is magic,” says Sarah McIvor.

Gary Jarvis the general manager of Heritage Christchurch for the past six years, which included two years of overseeing the extensive refurbishment of the grand Old Government Building, has been promoted to group operations manager for Heritage Hotel Management.

“Heritage Christchurch’s restoration has been a labour of love and I am personally delighted it has worn the test of time and seismic events to remain a vital part of Christchurch’s priceless heritage,” says Gary Jarvis.

The 100 year old OGB building, designed by Joseph Clarkson Maddison, is registered as a category one building on the Historic Places Trust register and has been described as of ‘monumental significance’ by architectural heritage experts.

The building was awarded the Christchurch Heritage Trust Built Heritage Award in 2010 and the New Zealand Seismic Award 2012 in the Canterbury Heritage awards.

The Heritage Christchurch, first opened in 1996 as a luxury hotel, was relatively unscathed in the 22 February 2011 earthquake, but remained inside the imposed red zone cordon for over two years whilst renovation plans were finalised.